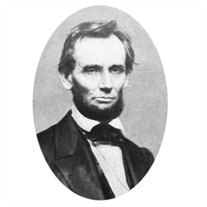 On April 14, 1865, John Wilkes Booth shot President Abraham Lincoln while Lincoln attended a performance at Ford’s Theater in Washington, D.C. The mortally wounded President was taken across the street to the William Peterson house where he died at 7:22 a.m. on April 15, 1865. The first public viewing of Lincoln was held in the White House on April 18, 1865. Following the funeral on April 19, 1865, the coffin was transported to the Capital for another public viewing. It was decided that President Lincoln should be returned to his home in Springfield, Illinois for burial and not in Washington, D.C. as Congress had hoped. President Lincoln’s funeral train began the long journey to Springfield on April 21, 1865. The funeral train would travel the route that Lincoln had made as president-elect. The only changes to the route were the omission of Cincinnati and Pittsburgh and the addition of Chicago. President Lincoln’s son William “Willie” Lincoln, who died in 1862, was disinterred and placed on the funeral train to be buried with his father in Springfield, Illinois. Large funeral precessions were held at each major stop along the funeral route, as the coffin was transported from the train to the place of public viewing. Cleveland, Ohio was the only city to hold its public viewing outdoors, as they did not have a building large enough to accommodate the large crowds of mourners. Finally, on May 3, 1865, the funeral train reached its final destination of Springfield, Illinois. On May 4, 1865, President Lincoln was buried in Oak Ridge Cemetery along with his son Willie. Mary Todd Lincoln, still too distraught, did not attend the services of her late husband and remained in Washington, D.C. At the time of their burial, President Lincoln and his son were placed in a temporary vault at Oak Ridge Cemetery awaiting the completion of the Lincoln tomb. The Lincoln tomb was not completed until 1874. In 1876, when a counterfeiting ring’s top engraver was imprisoned, his gang decided to break into the tomb and steal the body. They planned to hold Lincoln for a ransom of $200,000 in gold and the freedom of the engraver. As the body was being removed from the tomb, the plot was foiled when lawmen made their move. In 1900, President Lincoln’s son, Robert, was afraid that more attempts to steal the President’s body would be made. He decided that the new burial chamber was inadequate and plans were made to permanently protect the President from any future attempts to enter the grave. It was during this time of construction that the coffin of the President Lincoln was opened. A select few had the opportunity to view the body of President Lincoln one last time. The reasoning for this was to ensure that previous attempts to steal the body of President Lincoln were not successful. It was determined that the body in the coffin was indeed that of the President. His appearance had not changed much since that of his original burial in 1865. The new monument wouldn’t be completed until 1901; so again, President Lincoln’s coffin was placed in a temporary grave with his son’s coffin. On September 26, 1901, President Lincoln was permanently buried. The coffin was placed in a cage 10 feet deep and encased in 4,000 pounds of concrete. At last, President Lincoln and Willie were at rest. President Lincoln’s elaborate coffin was constructed of solid walnut, lined with lead and completely covered in expensive black cloth. It was six feet, six inches long and was decorated with sterling silver handles and studs extending the entire length of its sides. The center of the lid showcased a shield outlined in sterling silver studs and a sterling silver plate bearing the inscription: ABRAHAM LINCOLN 16th PRESIDENT OF THE UNITED STATES BORN: FEBRUARY 12, 1809 DIED: APRIL 15, 1865 It is estimated that one million people viewed President Lincoln’s body from the time of his death until his burial in Springfield, Illinois. His coffin was the most elaborate of that time. President Lincoln also had the distinction of having the largest funeral throughout the world, until President John F. Kennedy’s death in 1963. It could be said that Abraham Lincoln’s death triggered the beginning of modern day funeral service. President Lincoln was the first public figure to be embalmed and put on view for almost three weeks. The embalming technique used on President Lincoln was primarily used on soldiers who died during the Civil War and needed to be transported home for burial. Being able to view the body for extended periods of time without being iced was the precursor for modern day funeral service. People at that time thought embalming was a barbaric violation of the body, but Lincoln’s funeral had changed that perception. President Lincoln’s public viewing introduced the population to the benefits of embalming. Mourners were able to see the late president for twenty days and embalming made it possible.

On April 14, 1865, John Wilkes Booth shot President Abraham Lincoln while Lincoln attended a performance at Ford&#8217;s Theater in Washington, D.C. The mortally wounded President was taken across the street to the William Peterson house where... View Obituary & Service Information

The family of President Abraham Lincoln created this Life Tributes page to make it easy to share your memories.

Send flowers to the Lincoln family.