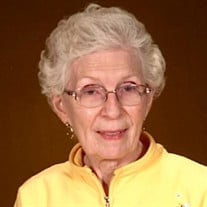 Anita Mary (Post) Arseneau of Rensselaer, Indiana passed away November 21, 2017 at the Rensselaer Care Center. Anita was born on June 18, 1936 in Padua, Ohio, the daughter of Ubran J. and Juliana (Schwieterman) Post. Anita attended Precious Blood High School and earned her teaching degree at the University of Dayton, where she entered the Sisters of the Precious Blood Convent. She taught in the states of Ohio, Indiana, Arizona, Virginia, Colorado and California. She was passionate about education and received great joy from teaching children during her tenure. In 1970, she left the Sisters of the Precious Blood and in 1971, in Watseka, Illinois; she married Tom Arseneau, who passed away in 1998. While married, she taught in Kankakee, Illinois and Morocco, Indiana. After her husband’s death and her retirement, she resided with her brother George and sister-in-law, Bernice Post. Anita enjoyed reading, word puzzles, playing euchre, doing Sudoku and visiting with friends. She was a member of St. Augustine Catholic Church. She is survived by one son, Jeff (Cher) Arseneau of Champaign, IL, three brothers, George (Bernice) Post of Rensselaer, Tim (Annie) Post of Rock Springs, WI, Terry (Pat) Post of Wren, OH, step-daughters, Mary Brown and JoAnne (Chris) Eads, five grandchildren, four great-grandchildren, and several step-grandchildren. She was preceded in death by her parents, husband and one brother, Marvin Post. Friends may call at the Jackson Funeral Chapel of Rensselaer on Saturday, November 25, 2017 from 8:30AM until the time of service. A Funeral Mass of Celebration will be held at St. Augustine Catholic Church on Saturday, November 25, 2017 at 10:00AM with Father Don Davison officiating. Interment will be at Oak Hill Cemetery in Watseka, Illinois. Memorial contributions may be made in memory of Anita to the St. Augustine Catholic School in Rensselaer.

The family of Anita M. Arseneau created this Life Tributes page to make it easy to share your memories.

Send flowers to the Arseneau family.