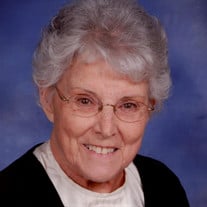 Anna Christene “Chris” Cly, 83 years old of Rensselaer, Indiana passed away unexpectedly on Tuesday, September 19, 2017 at Franciscan Health Rensselaer. Chris was born in Berea, Kentucky on January 29, 1934, the daughter of John V. and Hazel Ann (Gatliff) Bryant. Chris graduated with the class of 1953 from Salem High School, Salem, Indiana. On December 18, 1971, in Brownsburg, Indiana Chris married Arnold E. Cly, Sr. Arnold passed away on January 8, 2007. Chris was most recently employed with the Jasper County Library where she was a library clerk. She previously served as a receptionist and trust department personnel for 12 years at the First of American Bank (now PNC Bank) and was the accountant for 12 years at the former Massey-Ferguson Farm Implement store, both in Rensselaer. Chris was a member of the First Christian Church of Rensselaer where she had served as a Sunday School teacher, was past president of the Christian Women’s Fellowship and a former member of the Dartball team. She enjoyed outdoor sports. Chris was an expert in archery and was a member of Brockcreek Bow Hunting Club, a member of the Black Diamond Motorcycle Club and a past member of the Curtis Creek Country Club. Chris enjoyed spending time crafting, doing ceramic’s and painting. Surviving is her loving family, daughter Cathy McCarty of Rensselaer, Indiana and daughter Vera J. (Bob) Kurtz of Remington, Indiana, a stepdaughter Terri (Tim) Gates of Bedford, Indiana, 15 grandchildren, 20 great grandchildren, one great great grandchild, a brother, Wilburn (Rita) Bryant of Solsbury, Indiana, and step daughter in-law Carol Cly of LaFountain, Indiana. Chris was preceded in death by her parents, her loving husband Arnold, son in-law Billy McCarty, step son Arnold E. Cly Jr., step daughter Susan, and two brothers, Bernon and Vernon Bryant. Friends will be received by the family at the Jackson Funeral Chapel of Rensselaer on Monday, September 25, 2017 from 3-7 pm. Funeral services will be at 10:30 am on Tuesday, September 26, 2017 at the Jackson Funeral Chapel of Rensselaer with Rev. Elizabeth Hartmann officiating. Private family burial will be at Weston Cemetery in Rensselaer. Memorials may be made to the First Christian Church of Rensselaer.

The family of Anna Christene "Chris" Cly created this Life Tributes page to make it easy to share your memories.

Send flowers to the Cly family.