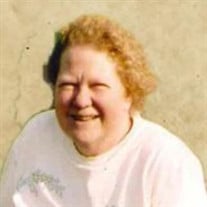 Arlene F. Sanders, 74, of Brook, was welcomed to heaven by her Lord and Savior Jesus Christ on Sunday, April 11, 2021. She was born on January 30, 1947, the daughter of the late Albert and Marjorie (Kingdon) Wienrank, in Watseka, IL. The family moved to a farm in Rensselaer when Arlene was very young and farmed that land for more than 50 years. Arlene went to Jordan School from 1953 to 1961 and graduated from Rensselaer Central High School in 1965. She married Jerry Lynn Sanders on June 27, 1965, after he had returned from serving in the United States Army in Korea. They were married at the Presbyterian Church of Goodland, with a reception at Foster Park. The family lived in several locations around northwest and central Indiana, and Arlene always made each house a home—painting the rooms and decorating them with lambs and rocks. Arlene loved working in the outdoors, watching animals, and feeding the birds. Arlene was an avid gardener and taught many people how to can fruit, vegetables, and meat—canning as much as 1,000 quarts of produce in a single year. She was also an accomplished baker, known for her apple and peach pies. Jerry and Arlene were well-known for cutting and hauling firewood. Arlene also spent nine years working as a librarian in three public libraries. The Lord blessed Arlene’s marriage to Jerry with four daughters: Karen (Gary) Cooper of Brook, Lynnette (Paul) Scharf of Columbus, Wis., Aimee (Joshua) Sayers of Nashville and Rebekah Sanders of New Whiteland. Others left behind to cherish her memory include 13 grandchildren: Autumn (Nathan) Stratton of Monticello, Meagan Cooper of Brook, Kristen Barth of Buck Creek, Erin (Brandon) Denton of Rensselaer, Heather (Gregory) Robinson of Morocco and Laura, Kara, Leah and Analise Cooper, all of Brook; Bridgette Brown of New Whiteland; and Benjamin, Carlene and Jenna Sayers of Nashville; eleven great-grandchildren: Ryan, Owen, Isabel and Emerson Barth of Buck Creek; Grady, Kaylie and Audrey Stratton of Monticello; and Maci and Trey Robinson of Morocco; brother Raymond Wienrank of Rensselaer; sisters Mary (Steve) Moerhing of West Lafayette and Tina (Thomas) Wenrick of Rensselaer; brothers-in-law Melvin Myers of Rensselaer, Wayne (Nancy) Sanders of Monon, Billie Sanders of Rensselaer, Thomas (partner Linda) Sanders of Otterbein; sisters-in-law Janice Ferguson of Kokomo and Crystal Sanders of Brookston; many nieces and nephews, and many other relatives and friends. In addition to her parents, Arlene was preceded in death by her husband, Jerry, on May 25, 2018; sister Ruth Ann Myers; brothers-in-law Gale and Keith Sanders and Max Ferguson; sisters-in-law Pamela Sanders and Dawn Sanders and Cheryl Miller; and granddaughter Lainey Cooper. Arlene’s life verse is Psalm 18:2: “The LORD is my rock, and my fortress, and my deliverer; my God, my strength, in whom I will trust; my buckler, and the horn of my salvation, and my high tower.” A funeral service will be held for Arlene at 2:00 p.m. (CDT) on Tuesday, April 20, 2021, at Jackson Funeral Chapel in Rensselaer. Pastor Todd Poynter of Greenwood Bible Baptist Church will officiate, and burial will follow at Goodland Cemetery. Arlene’s family will greet relatives and friends on Tuesday, April 20, from 12:00 p.m. to 2:00 p.m. (CDT). Memorials may be made to Ronald McDonald House Charities, 1301 22nd Street #905, Oak Brook, IL 60523. Jackson Funeral Chapel in Rensselaer has been entrusted with Arlene’s arrangements. Additional information may be found at www.jacksonfuneral.com Arlene’s family extends its heartfelt appreciation to the staff at PhysioCare Hospice of Lafayette for their care during Arlene’s final days.

Arlene F. Sanders, 74, of Brook, was welcomed to heaven by her Lord and Savior Jesus Christ on Sunday, April 11, 2021. She was born on January 30, 1947, the daughter of the late Albert and Marjorie (Kingdon) Wienrank, in Watseka, IL. The family... View Obituary & Service Information

The family of Arlene F. Sanders created this Life Tributes page to make it easy to share your memories.

Send flowers to the Sanders family.