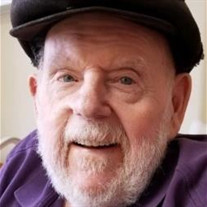 Arthur Wiers, age 98, of DeMotte, Indiana passed away Tuesday, January 29, 2019 at the Rensselaer Care Center in Rensselaer, Indiana. Arthur was born in Highland, Indiana on December 12, 1920, the son of Gerrit and Effie (Kickert) Wiers. He moved to DeMotte in 1985. Prior to moving to DeMotte, Arthur lived in Lansing, Illinois from 1954-1985. His first marriage was in Munster, Indiana on December 29, 1944 to Ida Joan Schoon. After 51 years of marriage Ida passed away on September 2, 1996. On November 29, 1997, in Lansing, Illinois Arthur married Lorraine (Kooy) Hoekstra who preceded him in death in December 19, 2008. Arthur was a farmer and a plant worker at Pleasant View Dairy in Highland, Indiana from 1951 to 1985. He enjoyed doing yard work and especially mowing his lawn. Surviving are two daughters, Carol Eenigenburg of DeMotte, IN and Judy Kooi of Otsego, MI, two sons, Rev. Arthur (Ruth) Wiers, Jr. of Mishawaka, IN and Tom (Cindy) Wiers of Richmond, IL; twelve grandchildren, 22 great grandchildren, a sister, Beatrice Zeilenga of Munster, IN and sister-in-law Reba Wiers of DeMotte, IN. Arthur was preceded in death by his parents Gerrit and Effie, his wives Ida and Lorraine, a daughter Diane Joy, a son David Allen, sons-in-law Albert Kooi and Richard Eenigenburg, a sister, Grace Oppenhuis and his brothers, Peter, Gerbrand, Marinus, James, Andrew, Neil and John. Friends may call at the Jackson Funeral Service in DeMotte, Indiana on Sunday, February 3, 2019 from 12:00 p.m. until 2:00 p.m. Funeral services will be held on Sunday, February 3, 2019 at the Jackson Funeral Service in DeMotte at 2:00 p.m. with Rev. John Huff officiating. Private burial services will be held at Holland Cemetery. In lieu of flowers memorials may be made to the Rensselaer Care Center.

Arthur Wiers, age 98, of DeMotte, Indiana passed away Tuesday, January 29, 2019 at the Rensselaer Care Center in Rensselaer, Indiana. Arthur was born in Highland, Indiana on December 12, 1920, the son of Gerrit and Effie (Kickert) Wiers. He... View Obituary & Service Information

The family of Arthur Wiers created this Life Tributes page to make it easy to share your memories.

Send flowers to the Wiers family.