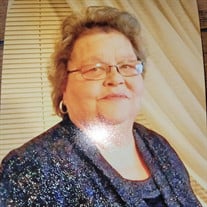 Barbara Ellen Rowe, 74, a resident of Dutton, Alabama, passed away Monday, November 15, 2021 at her residence. Barbara was born in Rensselaer, Indiana on December 2, 1946, the daughter of Willard Paul Hilton and Geraldine (Rude) Eaton. Barbara married Frank D. Rowe on February 29, 2000, in South Carolina and he passed in November, 2016. Barbara was previously married to Dennis Luchene. Barbara was a hybridizer of day lilies at the Day Lilly Farm in Rensselaer, IN for sixteen years. She was also a bus driver for Lowell Baptist Church for three years and Tri-County Schools for three years. She was a member of the First Christian Church in San Pierre, IN where she was the head of the kitchen within the church and taught Sunday school for eight years. Barbara is survived by her children, Dennis E. (Margaret “Peggy”) Luchene Jr of Michigan and Dawn (Roy) Deardurff of Dutton, AL; grandchildren, Dennis (Deanna) Luchene III, Joseph (Nicole) Luchene, Ryan (Jessica) Allen, Eric (Amanda) Luchene; ten great-grandchildren; siblings, Willard Paul Hilton Jr of Rensselaer, Robert (Roxie) Hilton of Kewanna, IN, Lindy “Jeter” (Kim) Eaton of Rensselaer; first husband, Dennis Luchene. Barbara was preceded in death by her husband, Frank; parents, Willard and Geraldine; sister, Beverly Holliday. Friends may call on the family at Jackson Funeral Chapel of Rensselaer on Monday, November 22, 2021, from 5:00 p.m. to 7:00 p.m. A funeral service will be held on Tuesday, November 23, 2021, at Jackson Funeral Chapel at 11:00 a.m. with Pastor Rusty Tague officiating. Interment to follow at Memory Gardens of Rensselaer. Memorial contributions may be made to the First Christian Church of San Pierre.

The family of Barbara Ellen Rowe created this Life Tributes page to make it easy to share your memories.

Send flowers to the Rowe family.