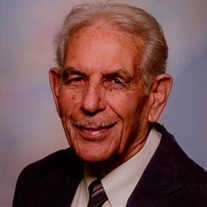 Bernard Whitaker, Sr., age 91, passed away at his home in Winamac, Indiana on Sunday, November 5, 2017. He was born on September 1, 1926, in Gifford, Indiana, the son of Frank and Minnie (Salyers) Whitaker. On June 10, 1948, in Rensselaer, Indiana, Bernard married Dorothy Helen Salyers. Dorothy passed away on August 6, 2017. Bernard and Dorothy enjoyed living in Dade City, Florida for the last 26 years. Bernard recently returned to Winamac to live with his son. He was a veteran of the U.S. Army, having served in World War II. Bernard had been the owner and operator of Cass Construction Company and Bernie’s Packaged Liquors. He had also worked for the Medaryville Lumber Company. Bernard had a heart for helping those in need, enjoyed playing golf and going RV’ing. He graciously donated the building and grounds of the Veterans of Foreign War Post in Medaryville, Indiana. Surviving are his loving family, sons Bernard (wife Diana J.) Whitaker, Jr. of Winamac, Indiana and Mark G. (wife Mary A.) Whitaker of Covington, Indiana, six grandchildren and 20 great-grandchildren. Bernard was preceded in death by his parents, his wife Dorothy, his sister Beatrice, and five brothers, Bruce, Brad, Byrle, Bobby and Burns. A Time of Remembrance will be held at the Jackson Funeral Chapel of Rensselaer from 10:00 a.m. until 12:00 p.m. CST on Saturday, November 18, 2017, with Military Honors to follow. In Bernard’s memory, the family suggests memorials be made to Feed the Children, P.O. Box 97067, Washington, D.C. 20090-7067.

The family of Bernard Whitaker Sr. created this Life Tributes page to make it easy to share your memories.

Send flowers to the Whitaker family.