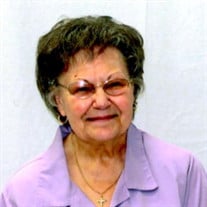 Beverly Gail Poynter, 80, of Rensselaer, Indiana, passed away on June 18, 2021 in Crown Point, IN. Beverly was born in Chicago, IL on September 26, 1940, the daughter of James I. and Garnett Helene (Horn) Cooper. Beverly graduated from George Rogers Clark High School with the Class of 1958. Beverly married the love of her life, Robert Franklin Poynter, on November 7, 1976 in Hessville, IN, and he survives her. Beverly worked as an upholsterer at Simmons Mattress Company for 21 years. Beverly was a core member of the Hope Community Church of Rensselaer. Beverly enjoyed archery, Native American dancing, and she was also a member of the Christian Motorcycle Association. Beverly is survived by her husband, Robert; children, Pamela Bourrell of Cedar Lake, IN, Laura Karasoff of Valparaiso, IN, Martha Hedger of North Judson, IN, John Poynter of Rensselaer, IN, Robert Poynter of Rensselaer, IN; step-children, Harland “Frank” Poynter of Maine, Roberta Whitten of Maine, Rebecca Oliver of Richmond, VA; 23 grandchildren, three of whom were raised by Beverly and Robert, Angie (Frank) Turnpaugh of Rensselaer, IN, Crystal Hedger of Portage, IN, and Amanda Hedger of Mason City, IA ; 21 great grandchildren; sibling, Thomas (Marci) Cooper of Highland, IN; sister-in-law, Carol Cooper of Hammond, IN; brother-in-law, Gene Minton of London, KY. Beverly was preceded in death by her parents; siblings, Karen A. Minton and James “Mick” Cooper; step-son, Richard Poynter; and step-daughter-in-law, Sharon Poynter. Friends may visit with the family from 12:30PM to 2:30PM on Sunday, June 27, 2021 at Hope Community Church of Rensselaer. A Celebration of Life will follow at 2:30pm with Rev. Kenin Smith officiating. Jackson Funeral Chapel of Rensselaer has been entrusted with the arrangements. In lieu of flowers, memorial contributions may be made to Hope Community Church of Rensselaer.

Beverly Gail Poynter, 80, of Rensselaer, Indiana, passed away on June 18, 2021 in Crown Point, IN. Beverly was born in Chicago, IL on September 26, 1940, the daughter of James I. and Garnett Helene (Horn) Cooper. Beverly graduated from George... View Obituary & Service Information

The family of Beverly Gail Poynter created this Life Tributes page to make it easy to share your memories.

Send flowers to the Poynter family.