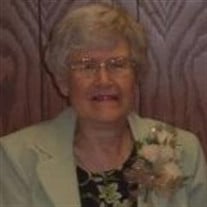 Beverly B. Shuster, age 80, passed away Friday, December 7, 2018 at South Bend Center for Hospice Care, South Bend, Indiana. Beverly was a longtime resident of Rensselaer, Indiana, moving to Lafayette, Indiana before moving to South Bend. She was born in Brook, Indiana on December 18, 1937, the daughter of Harvey and Elsie (Schanulab) Bupp. Beverly attended school in Mt. Ayr, Indiana and graduated from Mt. Ayr High School with the class of 1955. On September 13, 1958, Beverly and Harold Allen Shuster were married in Rensselaer, Indiana. They were blessed with two daughters, Rita and Janet. Along with being a homemaker and raising two daughters, Beverly had worked at the former Farmers and Merchants Bank in Rensselaer and as a legal secretary. Beverly was a member of the Trinity United Methodist Church in Rensselaer where she was active in many facets of the church. She was a past member and past president of the Jasper County Hospital Auxiliary, member and past president of Tri-Kappa Sorority, was a former member of the Rensselaer Band Boosters and was a past Girl Scout leader. Surviving is two daughters, Rita Hughes of Lafayette, IN and Janet Crudden (Scott Scopetski) of Nottingham, NH, five grandchildren, Samantha and Emily Hughes, Trevor Shuster (Samantha Bartles), and Taylor and Trajen Crudden, a great-granddaughter Aria Shuster and her sister, Dorothy Bupp of South Bend, IN. She was preceded in death by her parents and her husband Harold who passed away on April 23, 2012. Friends may visit with the family on Tuesday, December 11, 2018 from 10:00 a.m. until 12:00 p.m. (cst) at the Jackson Funeral Chapel in Rensselaer. Funeral services for Beverly will be held at 12:00 p.m. (cst) on Tuesday, December 11, 2018, at the Jackson Funeral Chapel in Rensselaer with Pastor John Hostetter officiating. Burial will follow at Mt. Calvary Cemetery in Rensselaer. Memorial may be made to the Trinity United Methodist Church, 107 E. Angelica Street, Rensselaer, IN 47978 or the Good Samaritan Food Pantry in Rensselaer.

The family of Beverly B. Shuster created this Life Tributes page to make it easy to share your memories.

Send flowers to the Shuster family.