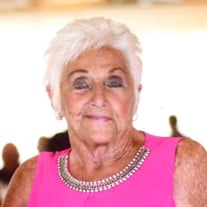 Carol J. Selby, age 84, of Rensselaer passed away Sunday, May 29, 2022. Carol was born in Rensselaer, IN on March 1, 1938, the daughter of Homer and Ada (Eaton) Williams. She was a lifetime resident. Carol attended the Rensselaer school system. On June 10, 1961, she married Leon Selby and he preceded her in death on December 8, 2015. For 40 years, Carol was a horse trainer and co-owner of Selby Racing Stables with Leon and was a member of the United States Trotting Association. She was also the co-owner/operator of the Marathon Gas & Service Station in Rensselaer for 20 years. Carol was a member of the Church of the Nazarene in Rensselaer. She was a former member of Curtis Creek Golf Course. She was an avid card player at the Senior Citizen’s Center and was a member of the Bunco Club. Carol also loved gardening. The highlight of her life was spending time with her family. She will be dearly missed by all who knew her. Carol is survived by her children, Julius “Butch” (Christal) Selby of Rensselaer, IN, Brett (companion Lidia Zych) Selby of Anderson, IN, Jody (Jeff) DeBoy of Monticello, IN, and Lisa (Don) Watt of Rensselaer, IN; ten grandchildren, John Meister, Lindsey (Luke) Skiles, Kylee (Jordan) Thurston, Sandra (Owen) Korn, Chelsea (Andrew) Neita, Meghan Selby, Brittany Selby, Haley (Faneuil) Sandzén, Chassity (Justin) Howard, and Melissa (George) Buck; sixteen great-grandchildren, Haley, Pieper, Faneuil, Nathan, Landon, Pieper, Kian, Brody, Leighton, Parker, Palmer, Jack, Otto, Nora, Bodie, Claire; sister, Shirley Smith of Tampa, FL; aunt, Peggy Korth of Shelby, IN; many nieces, nephews, great nieces and nephews, and many members of both the Selby and Pieper families. Carol was preceded in death by her parents, husband, Leon, first husband, Julius Pieper Jr., brother, Jerry Williams, grandson, Jason Selby and great-grandson, Robert Davis. Friends may call on the family at Jackson Funeral Chapel of Rensselaer on Thursday, June 2, 2022, from 3:00 to 7:00 p.m. CDT. Funeral services will be on Friday, June 3, 2022, at the Rensselaer Church of the Nazarene at 10:30 a.m. CDT with Reverend Lisa Ulrich officiating. Burial will follow at Memory Gardens of Rensselaer. Memorial contributions may be made to the Jesse Brown VA Medical Center, 820 S. Damen Avenue, Chicago, IL 60612.

Carol J. Selby, age 84, of Rensselaer passed away Sunday, May 29, 2022. Carol was born in Rensselaer, IN on March 1, 1938, the daughter of Homer and Ada (Eaton) Williams. She was a lifetime resident. Carol attended the Rensselaer school system.... View Obituary & Service Information

The family of Carol J. Selby created this Life Tributes page to make it easy to share your memories.

Carol J. Selby, age 84, of Rensselaer passed away Sunday, May...

Send flowers to the Selby family.