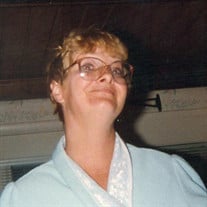 Cathy Kleist, age 70, of DeMotte, passed away on March 18, 2020 at Franciscan Health Crown Point. She was born December 21, 1949, in Gary, IN, the daughter of Louis & Florence (Szazynski) Uricki. Cathy attended Highland High School, Class of 1967. She married Thomas G. Kleist, Sr. on December 6, 1985 in Roselawn. Cathy was a homemaker, affiliated with Christian Reformed Church, and Christian Bible students. She enjoyed painting, playing the organ and piano, camping, and loved her dogs. Cathy is survived by her husband: Thomas Kleist, Sr. of DeMotte, IN; children: Larry (LeAnn) Ciupik of Fort Wayne, IN; Robbie (Stacey) Ciupik of Columbia City, IN; Holly (Serbi) Hosu of Joliet, IL; Michael Kleist of Indianapolis, IN; Thomas Jr. (Wendy) Kleist of Remington, IN; Chandra (Shannon) Carpenter of Fort Wayne, IN; Timothy Kleist of Roselawn, IN; 12 grandchildren; sister: Pat (Don) Trzyna; numerous nieces & nephews. Cathy is preceded in death by her parents; brother, Ron Uricki; and sister: Marian Bellinger. Due to current health concerns all services will be held at a later date. In lieu of flowers, memorial contributions may be made to the family

The family of Cathy L. Kleist created this Life Tributes page to make it easy to share your memories.

Send flowers to the Kleist family.