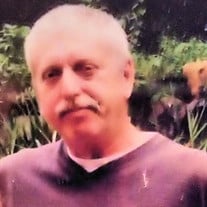 Charles Louis “Charlie” Clemans, age 58, of Rensselaer passed away March 18, 2019 at Franciscan Health Rensselaer. Charlie was born in Rensselaer, Indiana on December 5, 1960, the son of George Clemans and the late Peggy (DeMoss) Clemans Charlie was raised in Jasper County where he graduated from Kankakee Valley High School with the class of 1980. He enjoyed watching the New England Patriots and spending time with his family. He was employed for forty-one-years as a fork lift operator with Leggett & Platt in Rensselaer. Charlie was married in Rensselaer on April 7, 1990 to Christina Lynn Malott who survives. Surviving with his loving wife Christina are five children, Charlie Clemans, Tyler Clemans and Dustin Clemans all of Rensselaer, Trent McElroy of Ohio and Marlena Miller Risner. Charlie is also survived by two grandsons, Gabriel McElroy and Porter Clemans, his father, George Clemans of Brook, Indiana, two brothers, Rick Clemans and Gary Clemans both of Rensselaer and a sister, Tammy Schultz of Brook, Indiana. He was preceded in death by his mother Peggy and a sister, Anna Parks. Friends may call at the Jackson Funeral Chapel in Rensselaer on Thursday, March 21, 2019 from 9:00 - 11:00 a.m. Funeral services will be held Thursday at 11:00 a.m. at the Jackson Funeral Chapel in Rensselaer with Rev. Elizabeth Hartmann officiating. Memorials may be made to Riley Hospital for Children, c/o Riley Children’s Foundation, 30 S. Meridian Street, Suite 200, Indianapolis, IN 46204-3509.

The family of Charles "Charlie" Louis Clemans created this Life Tributes page to make it easy to share your memories.

Send flowers to the Clemans family.