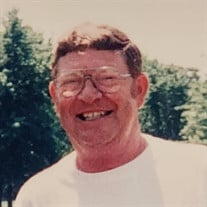 Claude “Slow” Mansfield, Jr. was born on January 20, 1937. On March 29, 2021, Claude passed peacefully at Franciscan Health Lafayette East, with his wife Joyce, son Scott, daughter Terri, son-in-law Steve, and granddaughter Megan by his side. Claude was a native of Brookston and resident of Rensselaer, where he lived with his wife, Joyce, for more than 50 years. Claude graduated in 1955 from Brookston High School. He got his nickname “Slow” from some former co-workers, who told him he was always slow! He was well known in Rensselaer, making his daily rounds to the store for his paper, stopping for coffee at his friend Dan’s Bar & Grill, who made him fried fish on Friday’s. When Claude was sick at home, Dan would still bring his fish to him! He will be sadly missed and always loved by many. He is survived by his wife, Joyce (Zickmund) Mansfield; daughter, Theresa Mansfield Jennings (Steve); son, Anthony Scott Mansfield (Alicia); daughter, Rebecca Mansfield Berthelot (Eric); grandchildren, Stephanie, Megan, Michael, Todd, Erica, Chase, and 3 great grandchildren. He is also survived by his brothers, Pete (Janel), Todd (Darla); sister, Sue Mansfield Wells (Noah); cousin, Joe; sisters-in-law, Diane Mansfield, Mary Mansfield and by many nieces and nephews. Claude was preceded in death by his parents, Claude Mansfield and Helen (Richardson) Mansfield of Brookston, sister, Barbara Mansfield Kern, brothers, Brad and Denny Mansfield. The family would like to thank the staff at the Care Center in Rensselaer and the hospital in Lafayette. Jackson Funeral Chapel of Rensselaer has been entrusted with the arrangements. Friends may call upon the family at Jackson Funeral Chapel from 10:00 AM to 12:00 PM on Thursday, April 1, 2021. A Funeral Service will be held immediately following visitation at Jackson Funeral Chapel at 12:00 PM with Dr. James Blanchard officiating. Interment will occur at Memory Garden Cemetery of Rensselaer. Due to the current pandemic, mask wearing and social distancing will be practiced. In lieu of flowers, memorial contributions may be made to the American Cancer Society.

The family of Claude "Slow" Mansfield Jr. created this Life Tributes page to make it easy to share your memories.

Send flowers to the Mansfield family.