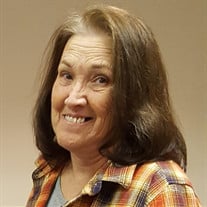 Connie L. Amsler-Minix, age 64, of Rensselaer passed away unexpectedly Thursday, July 13, 2017 at Franciscan Health Rensselaer, Rensselaer, Indiana. Connie was born August 13, 1952, in Rensselaer, to the late Donald R. and Irene B. (Cook) Anderson. She was a lifetime resident and attended Rensselaer Schools, Class of 1970. Her first marriage was in 1969 to John E. Smith and together they had three beautiful daughters. On October 23, 1987, in Panama City Beach, Florida, Connie married Bert Amsler, II and they shared 18 loving years together. Bert preceded her in death on April 5, 2005. On May 24, 2013, in Cookville, Tennessee, Connie married Charlie Minix, a longtime friend and companion. She was a former dispatcher and schedule manager for her family’s trucking businesses. Connie enjoyed riding horses, woodworking and was an avid reader. Her favorite reads included forensic and thriller stories and mysteries. She loved spending time outdoors and being with family and friends. Connie was known for her great cooking skills and enjoyed sharing her recipes with others. Surviving is her husband, Charlie Minix of Rensselaer; daughter’s Jodie (Rich) Marino of Las Vegas, Nevada, Daphne Meyer and Lorie (Jarod) Barber both of Rensselaer; stepchildren, Kelly Sperle and Kim Mitchell both of Rensselaer, Bill (Camilla) Amsler of Francesville, Indiana, Tobey Amsler of Baroda, Michigan and Chance (Kristina) Amsler of Rensselaer; grandchildren, Kolton and Casidee Meyer, Madeline, Emily and Olivia Barber, and Jocelyn, Sebastian and Lola Marino; ten step-grandchildren; one great-granddaughter, Amberly Meyer; two brothers, Donald R. “Reggie” (Teresa) Anderson of Clarksville, Georgia and Michael E. Anderson of Rensselaer, and a sister, Kathryn S. Hardy of West Palm Beach, Florida. Connie was preceded in death by her parents, her second husband Bert Amsler, and a grandson, Clinton Meyer. Friends may visit with the family on Saturday, July 15, 2017 from 2-8 p.m. at the Jackson Funeral Chapel of Rensselaer. Funeral services for Connie will be held at 1:00 p.m. at the Jackson Funeral Chapel of Rensselaer on Sunday, July 16, 2017, with Pastor John Hostetter officiating. Burial will follow at Memory Gardens Cemetery, Rensselaer, Indiana. Memorials may be made to the family.

The family of Connie L. Amsler-Minix created this Life Tributes page to make it easy to share your memories.

Send flowers to the Amsler-Minix family.