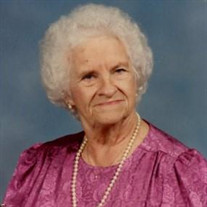 Cora E. Lehe, age 100, passed away Sunday, February 11, 2018 at Brownsburg Meadows . Cora was formerly of Rensselaer, Indiana, most recently residing in Brownsburg, Indiana. Cora was born in Manistee, Michigan on March 4, 1917, the daughter of Elmer and Mary (Dick) Duttenhaver. She moved with her family to Indiana where she attended school in Kentland, Indiana and graduated with the class of 1935 from Remington High School, Remington, Indiana. On February 12, 1938, in Kentland, Cora married Raymond H. Lehe. Cora and Raymond farmed near Remington and Goodland for many years before retiring and moving to Rensselaer. Raymond passed away on August 19, 1996. While residing in Rensselaer Cora was an active member of the Trinity United Methodist Church. She was a 50-year member of the Oder of Eastern Star Chapter #41 and was a representative of Indiana to the Grand Chapter of Ontario, Canada in 1958. Cora was a member of the Literary Club while residing in Rensselaer. Surviving Cora is her loving daughter, Joetta (Larry) Pitman of Brownsburg, Indiana, ten grandchildren, ten great grandchildren and two great great grandchildren. She was preceded in death by her parents, her husband Raymond, a daughter, Wanneta Hughey, a son, Gary Lehe, four sisters and four brothers. Friends may call at the Jackson Funeral Chapel of Rensselaer on Friday, February 16, 2018, from 10:00 a.m. until 11:00 a.m. Funeral services will be held at the Jackson Funeral Chapel of Rensselaer on Friday at 11:00 a.m. with Pastor John Hostetter officiating. Burial will follow at Memory Gardens Cemetery in Rensselaer, Indiana. Memorials are suggested to the Trinity United Methodist Church in Rensselaer.

The family of Cora Elizabeth Lehe created this Life Tributes page to make it easy to share your memories.

Send flowers to the Lehe family.