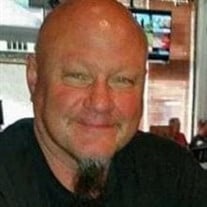 Craig Potts was born on May 26, 1959, in Rensselaer, Indiana to Raymond and LaDonna (Stone) Potts and passed away at his home in Charleston, South Carolina. Craig was preceded in death by his parents and two brothers, Wayne Potts and Lee Potts. He is survived by his brother Jeff Potts and his family, wife, Marcia and daughters, Kristina, Lindsey, and Hannah. Craig grew up on the farm in Rensselaer where he enjoyed farm life and working with the animals. He attended school in Rensselaer, graduating with the Class of 1977 from Rensselaer Central High School. While attending high school Craig was a member of the Rensselaer Wrestling team, a sport he enjoyed very much. Craig was a sports fan and could be found watching his favorite football teams. He was dedicated in going to the gym every day, enjoyed meeting new people, discovering new restaurants and had an interest in history. After graduation from high school he attended Indiana State University, transferring after two years to the University of South Carolina, where he received his Bachelors of Science in Criminal Justice degree. For several years Craig worked as an investigator for the State of South Carolina Welfare Department. He became manager of the California Dreaming restaurant in Columbia, South Carolina, later moving to Charlotte, North Carolina where he continued in the management of various restaurants. Craig returned to South Carolina, moving to Charleston, where he continued to work in restaurant management and as a bartender until retiring around 2013. Craig had many friends in Charleston and liked to meet with them for dinner and good times. He enjoyed returning to Indiana to visit family and going to the farm where had spent many enjoyable years growing up. Craig will be greatly missed by his family and his friends. A time of visitation will be held at the Jackson Funeral Chapel in Rensselaer on Saturday, January 19, 2019 from 9:00 to 10:30 a.m. Funeral services for Craig will be held at 10:30 a.m. on Saturday at the Jackson Funeral Chapel in Rensselaer with Dr. James Blanchard officiating. Burial will follow at Weston Cemetery in Rensselaer.

Craig Potts was born on May 26, 1959, in Rensselaer, Indiana to Raymond and LaDonna (Stone) Potts and passed away at his home in Charleston, South Carolina. Craig was preceded in death by his parents and two brothers, Wayne Potts and Lee Potts.... View Obituary & Service Information

The family of Craig Allen Potts created this Life Tributes page to make it easy to share your memories.

Send flowers to the Potts family.