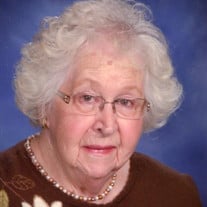 Eileen was born October 2, 1926 in Rensselaer to Perry S. and Ethyl McConnell Washburn. Known by her father as Dorothy or Dottie, having been named after his sister, to most others she was known as Eileen since that was how her mother enrolled her in school. Eileen graduated from Rensselaer High School in 1944, and was married in Rensselaer on December 17, 1951 to Robert J Studer, formerly of Fowler, in the dining room of their newly built modern home. By Eileen’s own account, Bob’s nickname for her was Sapphire, after the bossy character in Amos and Andy. To us, of course she was Mom, and to her grandsons she was simply Bobo. After high school, Eileen worked at the State Fire Marshall’s Office in Indianapolis, then in Rensselaer at the State Highway Garage, the State Bank and the Clinic of Family Medicine where she was bookkeeper for many years, retiring in 1984. Bob and Eileen enjoyed 22 years of retirement together, spending winters at their home in Mesa Arizona and summers in Rensselaer. They were fortunate to be in Arizona while their grandsons were young and had lots of fun and adventures teaching and playing with them. Although neither was college-educated, with hard work and common goals they were able to build three homes together and found fulfillment in working as a team to maintain them. Eileen passed away on Monday, July 30, 2018. She was preceded in death by her parents, and in April, 2006 by her brother, Willard S. Washburn, then just a few weeks later by her husband Bob. After Bob’s passing, Eileen enjoyed learning to play bridge, going to Red Hat lunches and the camaraderie of her friends at the Rensselaer Community Center. Under the carport of her home Eileen hosted the Community Center for lunch, and also hosted the 70-year reunion for RHS class of 1944. Eileen had a keen memory for dates, names and events, and at age 91 she was proud to be able to maintain her independence until becoming ill a few weeks ago. The Washburn’s are strong stock, of English decent, and are recorded being in Duxbury, Massachusetts in the early 1600’s. She will be missed by daughters Patty Michael of Phoenix and Nancy Studer (Steve Kochell) of Rensselaer, grandsons Robert Michael of Phoenix and Perry Michael (April Fendt) of Kokomo. Visitation will be held at Jackson Funeral Chapel Rensselaer from 3:00 - 6:00 pm CDT on Monday, August 6 with graveside services at Weston Cemetery on Tuesday, August 7 at 10:00 am CDT. In lieu of flowers, donations may be made to the Trinity United Methodist Church of Rensselaer or to the Saint Joseph’s College chapel renewal project. RIP Bobo!

Eileen was born October 2, 1926 in Rensselaer to Perry S. and Ethyl McConnell Washburn. Known by her father as Dorothy or Dottie, having been named after his sister, to most others she was known as Eileen since that was how her mother enrolled... View Obituary & Service Information

The family of D. Eileen Studer created this Life Tributes page to make it easy to share your memories.

Send flowers to the Studer family.