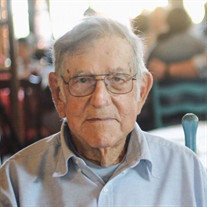 Dale V. Stath, a lifelong farmer, died on Tuesday, October 9, 2018 surrounded by his family. Dale was born February 28, 1928, the son of Frederick C. Stath and Mabelle (Putt) Stath. He married Ruth Marie Walkup of Kentland on September 19, 1954, they recently celebrated their 64th wedding anniversary. Dale graduated from Rensselaer High School with the class of 1946. He was a veteran of the U.S. Army, serving during the Korean conflict. Dale was a third-generation farmer who also raised livestock. He started farming in 1946 on the home farm purchased in 1920 by his grandfather Charles Stath. Dale was a substitute rural mail carrier for several years. He was the Indiana Rural Youth State President in 1954. Dale served on the Farm Bureau Co-op board for over 30 years and the Agriculture Stabilization and Conservation Service board for many years. Dale was a long-time member of the Trinity United Methodist Church of Rensselaer, serving in a number of capacities. In his youth Dale enjoyed square dancing and became an accomplished square dance caller. Dale is survived by his wife of 64 years, Ruth, his 5 daughters: Cindy Stath (James Barbee) of Dyer IN, Ginny (Steve) Carter of Rensselaer, Debbie (Larry) Graf of Rensselaer, Laura (Kevin) Price of Crawfordsville, and Kathy Madison of Morocco, 4 grandsons, 7 granddaughters, 6 great-grandsons, and 5 great-granddaughters; and brother Wade Stath of Hartford City IN. Dale was preceded in death by his parents, 2 brothers: Floyd Stath and Glen Stath, and 3 sisters: Bethel McClatchey, Freida Hancock, and Helen Gwin and a son-in-law, Scott Madison. Friends will be received by the family at the Jackson Funeral Chapel of Rensselaer on Thursday, October 11, 2018 from 2:00 – 8:00 p.m. CDT. Funeral services will be held at 10:30 A.M. CST on Friday, October 12, 2018 at the Jackson Funeral Chapel with Rev. Wayne Williams officiating. Burial with military honors will follow at Weston Cemetery in Rensselaer. Memorials contributions are suggested to the Dale Stath Family Agricultural Scholarship. His loss can be best summarized by with the following statement from his father, Frederick’s obituary in 1935:“Mr. Stath was considered one of Jasper County’s outstanding and progressive farmers. It is a sad blow to the family and the community to lose a man of such sterling worth and fine character such as Mr. Stath possessed. We have so few of them to spare.”

The family of Dale V. Stath created this Life Tributes page to make it easy to share your memories.

Send flowers to the Stath family.