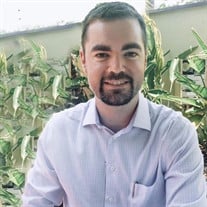 Daniel Bryan Kinsell, 37, of Lafayette, IN, passed away on October 5, 2020 following a fierce and courageous battle against Lymphoma. Just like he dealt with all experiences in life, Daniel managed his illness with strength, positivity, and his amazing (dry, witty, and sarcastic) sense of humor. He always wanted to spend as much time with his loved ones as possible. On his final day, he was surrounded by his children and family, whom he adored more than anything else in the world. He was born to parents, Stephen and Karyl Kinsell, on March 19, 1983, in Rensselaer, IN and raised in Remington, IN. Daniel graduated from Tri-County High School in 2002, attended Rose-Hulman Institute of Technology and graduated with a degree in Chemical Engineering from Purdue University. While at Rose-Hulman, he was a member of Lambda Chi Alpha fraternity, a legacy of his father. He was married to Sara (née Egan) on December 12, 2009 almost exactly five years after their first date. As Daniel would always say, they were fifteen, almost sixteen, glorious years. Daniel is survived by his wife and three children, Henry (5), Liam (3), and Cecilia (10 months), and his two chocolate labs, Payton and Gunner. He is also survived by his parents; paternal grandmother, Patricia Kinsell of Remington, IN; two sisters, Emily Kinsell (Jamie Richards) of West Lafayette, IN, Leslie Kinsell of Valparaiso, IN; Father and Mother-in-Law, Brian and Judith Egan of Rensselaer, IN; Brothers-in-Laws, Connor Egan of Zionsville, IN and Jacob (Ashley) Egan of Brandon, FL. He is the loving uncle of William Kinsell and Ruby Egan. Beyond his relatives, are the friends that became family. As Daniel once told his mother, “Everybody needs a friend.” Daniel was predeceased by his paternal grandfather, Robert Kinsell. Following his college graduation, he moved to Iowa and progressed through various roles of management at Grain Processing Corporation. After his first battle with Lymphoma, his family moved back to Indiana where Daniel worked at Tate & Lyle, most recently as Operations Manager. Daniel had such a passion for the business and was well liked and respected by all of his co-workers and employees. He could go from the plant floor to the board room without missing a beat. His selflessness and compassion to see others succeed left a lasting impression on all. Upon learning of his passing, messages poured in telling of how influential Daniel was in both their professional, but also personal lives. He encouraged everyone to do and be better. Daniel had two conditions when moving back to Indiana. The first, a large backyard where he could watch his children play while drinking his Woodford Reserve. The second, to become a member of John Purdue Club as a Football and Men’s Basketball season ticket holder. He was an avid Purdue Boilermaker fan and was always sporting his Old Gold and Black. He achieved both and considered it a life well-lived. Visitation will be held at Jackson Funeral Chapel in Rensselaer, IN on Thursday, October 8, 2020 from 1:00 – 5:00 pm. CDT. Masks are required. A private service for immediate family will follow with Father Rick Nagel officiating. Daniel pursued every possible treatment, both in Indiana and at the National Institutes of Health in Bethesda, MD. In honor of his determination, please consider becoming a bone marrow donor at Be the Match National Bone Marrow Registry or blood donor at a local blood bank to help save the lives of patients similar to him. Donations may also be made to the Immune Deficiency Foundation and the Daniel Kinsell Family Memorial at DeMotte State Bank or via the Daniel Kinsell Family Memorial GoFundMe.

Daniel Bryan Kinsell, 37, of Lafayette, IN, passed away on October 5, 2020 following a fierce and courageous battle against Lymphoma. Just like he dealt with all experiences in life, Daniel managed his illness with strength, positivity, and... View Obituary & Service Information

The family of Daniel B Kinsell created this Life Tributes page to make it easy to share your memories.

Daniel Bryan Kinsell, 37, of Lafayette, IN, passed away on October...

Send flowers to the Kinsell family.