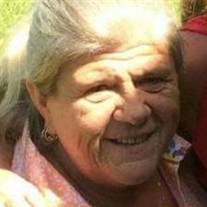 Debora K. Biggs of Rensselaer, Indiana passed away unexpectedly on Sunday, May 6, 2018, at Franciscan Health Lafayette East, Lafayette, Indiana. Debora was born in Rensselaer on October 13, 1952, the daughter of Earl and Versa (Patrick) Anselm. A lifetime resident of Rensselaer, Debora graduated from Rensselaer Central High School with the class of 1970. She worked in the office at Wm. O. Hopkins Trucking for several years. On February 14, 1981, in Rensselaer, Debora married Jesse Biggs who survives. Together they became parents of a son, Patrick, whom she loved dearly. Debora enjoyed family and was overjoyed when she became a grandmother. Some of her happiest times were those spent with her grandchildren, Lanae, Alexis, Thomas, Jaxson and Skylar. Surviving with her loving family Jesse, Patrick (wife Melissa), and five grandchildren is her sister, Shirley (husband Kendick) LaGrand and brother, Otis (wife Zofia) Anselm, both of Rensselaer. She was preceded in death by her parents, Earl and Versa Anselm and a sister, Mary Lou Anselm. Friends will be received at the Jackson Funeral Chapel of Rensselaer on Wednesday, May 9, 2018, from 2:00 to 8:00 p.m. Funeral services will be held on Thursday, May 10, 2018, at 10:30 a.m. at the Jackson Funeral Chapel of Rensselaer with Pastor John Hostetter officiating. Burial will follow at Memory Gardens Cemetery, Rensselaer. Memorials are suggested to your favorite charity.

The family of Debora K. Biggs created this Life Tributes page to make it easy to share your memories.

Send flowers to the Biggs family.