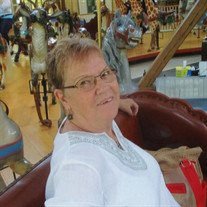 Diana Lois Dewey,73, of Rensselaer, Indiana passed away Thursday, June 14, 2018 at Franciscan St. Francis Health in Indianapolis. Diana was born in Rensselaer on March 30, 1945, the daughter of the late Webb E. and Elsie M. (Henson) Gibson. Diana was a 1963 graduate of Mt. Ayr High School. She formerly owned and operated a title search company, Diana L. Dewey, Inc., for over twenty years and was currently assistant manager at the Ritz Theater in Rensselaer. On February 18, 1984, Diana married Earl F. Dewey in Rensselaer, IN. Earl preceded her in death on June 23, 2004. Diana was affiliated with the Trinity United Methodist Church in Rensselaer. She was an avid book reader and especially enjoyed fishing on Lake Erie during the summer for walleye and perch. Spending time with her family and teaching her children, grandchildren and great grandchildren, whom she dearly loved, gave her great joy. She is survived by five children, Kristina (Jay) Woodlock of Morocco, IN, Kent (Tricia) Pieper of Roselawn, IN, David Dewey of Monticello, IN, Jon Dewey of Wilson, KS and Tim (Leah) Dewey of Brazil, IN; eleven grandchildren, six great grandchildren and a brother, Larry (Virgie) Gibson of Morocco, IN. Preceding her in death with her parents and her husband Earl, are four brothers and one sister. Friends will be received at the Jackson Funeral Chapel of Rensselaer Tuesday, June 19, 2018, from 10:00 a.m. to 12:00 p.m. Funeral services will be held at 12:00 p.m. on Tuesday at the Jackson Funeral Chapel of Rensselaer with Rev. Dennis Bennett officiating. Burial will follow at Weston Cemetery, Rensselaer, IN. Memorials are suggested to the American Cancer Society or the American Diabetes Association.

The family of Diana Lois Dewey created this Life Tributes page to make it easy to share your memories.

Send flowers to the Dewey family.