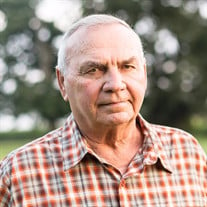 Donald Wayne DeWees, age 71, a lifetime resident of Jasper County, Indiana passed away November 28, 2018, at Franciscan Health Lafayette. Don was born on January 21, 1947, to Donald Clay and Katherine (Sheldon) DeWees. Don graduated from Rensselaer High School with the class of 1965. A strong-willed lifetime farmer, Don started farming alongside his father and continued the generational farm with his son-in-law Derrick. Additionally, Don was the co-owner of local businesses, Vision Ag Inc., Auto Works Inc., and Prairies Edge. Don supported his community in many ways throughout the years, including serving eight years on the Jasper County Sheriff Reserves. He was affiliated with the Trinity United Methodist Church in Rensselaer. Don was an avid outdoorsman with his dog always by his side. He enjoyed hunting and fishing, always claiming to have bagged the biggest “prize.” He never passed up the opportunity to have a party. Don loved being with family and friends, playing personal jokes and stirring the pot, leaving behind a lifetime of stories. On January 30, 2013, Don married Kimberlie J. Schwarzkopf, in Cancun, Mexico. Surviving with his loving wife Kimberlie is a son-in-law, Derrick Barton, his mother, Katherine “Kate” DeWees of Rensselaer, Indiana, one son, Tod DeWees of Lafayette, Indiana, and one daughter, Kimberly Barton of Rensselaer, Indiana, three granddaughters, Libby and Zoe Barton and Josie DeWees, two brothers, Patrick (Karen) DeWees of Rensselaer, Indiana and Dennis A. (Elizabeth) DeWees of Homosassa, Florida and numerous nieces and nephews. Preceding him in death was his father, Donald C. DeWees. Friends will be received by the family at the Jackson Funeral Chapel in Rensselaer on Tuesday, December 4, 2018 from 2:00 to 8:00 p.m. (cst). Funeral services for Don will be held on Wednesday, December 5, 2018, at 10:30 a.m. (cst) at the Jackson Funeral Chapel in Rensselaer with Pastor John Hostetter officiating. Burial will follow at Memory Gardens Cemetery in Rensselaer. Memorials are suggested to the Vision Ag Scholarship, noting Don DeWees in the memo line, c/o Jasper-Newton Foundation, P.O. Box 295, Rensselaer, IN 47978.

The family of Donald W. DeWees created this Life Tributes page to make it easy to share your memories.

Send flowers to the DeWees family.