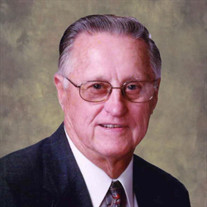 Donald Wayne Harmon, age 90 years, of Goodland, passed away on August 11, 2021, at Franciscan Hospital in Lafayette Indiana, where he had been a patient for 5 days. He was born on March 19, 1931 in Remington, Indiana to Curtis & Lucy (Alberts) Harmon, the youngest son of eight children. His early years were spent on the Alberts family farm. After his father's passing the family moved to Rensselaer where he spent the remainder of his childhood and graduated from Rensselaer High School in 1949. On November 25, 1951, he married Phyllis Jean (Ropp) Harmon, who passed away on February 11, 2021, at the Goodland Baptist Church, where he was a member until his passing. He had many jobs over the years. He worked at the Lilly Paper Straw factory in Goodland, took care of the family farm. He and mom ran a restaurant in Goodland for a year; he worked at the locker plant as a meat cutter and was a Jewel T salesman in Terre Haute for a short time. The rest of his working years were spent in the plumbing, heating and air-conditioning business where he worked for Plunketts in Kentland and Jones in Goodland. He then owned and operated Harmon & Sons Plbg, Htg, A/C in Brook & Goodland from 1971 to 1996. He was a member of the Goodland Lions Club, a Mason, a Cub Scout Master, on the Goodland Baptist Church dart ball league, and a member of Gideon’s International. He served as a deacon and trustee at the Goodland Baptist Church and was a member of the Grant Township Library board. He loved throwing horseshoes, fishing, his many woodworking projects, and spending time with his family. Dad was a great teaser and jokester, and he told many a good story. He enjoyed a good cup of coffee and it had better be hot! We love you dad. You will forever be in our hearts. He is survived by his children: Cathy & Marc Hacker, Andrews, IN, Dennis & Sandy Harmon, Brook, IN, Scott Harmon, Goodland, IN, Nancy & Mike Winger, Lafayette, IN, and David & Rhonda Harmon, Goodland, IN. 10 grandchildren: Melissa & Brian Haskin, Katie Harmon & Risha Schildkraut, Christopher & Liz Hacker, Cristin Eccles, Ben Harmon, Bethany Harmon, Andrew & Jenna Winger, Nicholas & Sarah Winger, Stephanie Jacobs, and Megan & Bill Runyon. 17 great grandchildren: Ian Haskin, Sophie Harmon, Emma Hacker, Kiley & Kailey Eccles, Emily Harmon, Austin & Jackson Winger, Jacob, Sydney, Abbie and Cody Winger, Margaret, Grace & Bellamie Jacobs and Brayden & Lilah Runyon. He is also survived by his sister Myrna Hudson of Lafayette, IN and many nieces and nephews. He was preceded in death by his parents, his wife of 69 years, his brothers Darrell, Lloyd, and Carl, his sisters Evelyn, Margie and Arlene. Granddaughter Jacquie Harmon and great granddaughter Jocelyn Jacobs. Friends may visit with the family at the Goodland Baptist Church on Monday, August 16, 2021, from 10:00 a.m. to 12:00 p.m. CST. A funeral service will be held at the church immediately following at 12:00 p.m. CST with Pastor Bob Rawlins officiating. Interment to follow at Goodland Cemetery. Memorial contributions may be made in memory of Donald to the Goodland Baptist Church, 117 E. Union Street, Goodland, IN 47948 or Riley Hospital for Children, www.rileychildrens.org

Donald Wayne Harmon, age 90 years, of Goodland, passed away on August 11, 2021, at Franciscan Hospital in Lafayette Indiana, where he had been a patient for 5 days. He was born on March 19, 1931 in Remington, Indiana to Curtis & Lucy (Alberts)... View Obituary & Service Information

The family of Donald Wayne Harmon created this Life Tributes page to make it easy to share your memories.

Donald Wayne Harmon, age 90 years, of Goodland, passed away on...

Send flowers to the Harmon family.