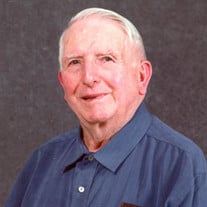 Donald L. Herre, 92, went home to be with the Lord on Thursday, December 26, 2019 at St. Vincent Hospital in Evansville, Indiana. He had resided at Woodlands Golden Living Center in Newburgh, Indiana for the past five months. Donald was born on March 1, 1927 in Goodland, Indiana, to Otto and Delma (Armold) Herre, Sr. He lived in Goodland until age 12 when he moved with his family to rural Rensselaer. He played on the only Mt. Ayr High School basketball team to win the sectional, and graduated in the class of 1945. He served as an M.P. in the U. S. Army Air Corps from 1945-1947, and in 1946 was stationed in Occupied Germany. He declined attending officer training school in order to return to his first two loves of this earth, his fiancé Phyllis J. Erb, and farming. Donald and Phyllis were married on March 10, 1948 at the home of Rev. Veale in Rensselaer. They resided near Mt. Ayr, where he farmed until his retirement in 1991. In 1989, they began spending winters in Gainesville, Florida, where they later purchased their retirement home. In 2005, he moved in with his daughter and family, in order to spend each day with his beloved wife Phyllis, who resided at Woodlands Golden Living Center. Donald was the last surviving founding communicant member of St. Luke Ev. Lutheran Church in Rensselaer. He was actively involved in the building of the church structure and served for twenty-four years as a Trustee and Deacon. He was member of a Christ Care Group at First Lutheran Church in Gainesville. Following the move to Newburgh, he attended the Lutheran Church of Our Redeemer in Evansville. Surviving are his two loving children, Ronald (Betty) Herre of Dayton, Ohio and Debbie (Tom) Wink of Newburgh, Indiana; three grandchildren, Anneka (Saptarshi Lahiri) Herre, Donald (Jamie) Herre and Eric Wink; one great-grandchild, Linnea Herre; and a brother, Leonard (Carolyn) Herre of Remington, Indiana. Donald was preceded in death by his parents, Otto and Delma, his wife Phyllis who preceded him in death on September 7, 2010, and two brothers, Marvin Herre, who passed away at the age of 4, and Otto Herre, Jr. and his wife Mary. Friends may call at the Jackson Funeral Chapel in Rensselaer on Friday, January 3, 2020 from 4:00 - 8:00 p.m. CST, or at the church an hour prior to the funeral on Saturday. Funeral services for Donald will be held at 10:30 a.m. CST on Saturday, January 4, 2020, at St. Luke Lutheran Church in Rensselaer with Pastor Benjamin Hertel officiating. Burial will follow at Memory Gardens Cemetery, Rensselaer, Indiana. Memorial contributions may be made to St. Luke Lutheran Church, 704 E. Grace Street, Rensselaer, IN 47978.

Donald L. Herre, 92, went home to be with the Lord on Thursday, December 26, 2019 at St. Vincent Hospital in Evansville, Indiana. He had resided at Woodlands Golden Living Center in Newburgh, Indiana for the past five months. Donald was born... View Obituary & Service Information

The family of Donald L. Herre created this Life Tributes page to make it easy to share your memories.

Send flowers to the Herre family.