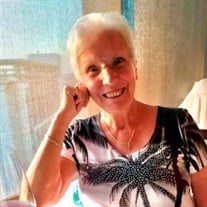 Donna Lou Biller, age 78, of Wheatfield, Indiana passed away on Wednesday, June 22, 2022 at Franciscan Health Crown Point. She was born on October 14, 1943 in Hammond, Indiana, the daughter of Martin and Agnes (McCauley) Mattingly. Donna graduated from Bishop Noll Institute in Hammond, Class of 1961. On April 18, 1970, she married her love, William “Bill” Biller. Donna worked clerical and office jobs for various employers including First National Bank of East Chicago, Swift Chemical in Hammond, Swift Agriculture in Calumet City, and Myers Heating & Plumbing of Griffith. She was a member of Sorrowful Mother Catholic Church in Wheatfield where she was involved with Helping Hands and the food pantry. Donna was a former member of St. Catherine of Sienna Parish Council and a Cub Scouts Den Mother. She enjoyed golfing, reading, traveling, and snow-birding to Fruitland Park, Florida. Donna is survived by her husband of 52 years, Bill Biller of Wheatfield, IN; sons: Mark (Dawn) Biller of Hammond, IN; Scott (Lisa) Biller of Kouts, IN; Tom (Cathi) Biller of St. John, IN; grandchildren: Josh and Ally; sister: Beverly (Calvin) Bolen; numerous nieces and nephews. She was preceded in death by her parents and three brothers: Kenneth, George, and Louis. Friends and family may visit at Jackson Funeral Service of DeMotte, IN on Sunday, June 26, 2022 from 3:00 until 7:00 PM. A Funeral Mass for Donna will be held at Sorrowful Mother Catholic Church on Monday at 10:30 AM with Father Michael McKinney officiating. Interment will be held at Memory Lane Memorial Park in Schererville. Memorial contributions in Donna’s name may be made to Carmelite Monastery or Poor Hand Maids of Jesus Christ in Donaldson, IN.

The family of Donna Lou Biller created this Life Tributes page to make it easy to share your memories.

Send flowers to the Biller family.