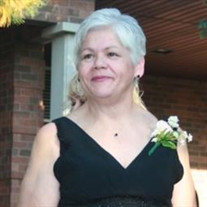 Donna Marie Occhipinti, age 65, of Lake Village, Indiana passed away at her home on Saturday, December 7, 2019. Donna was born on February 3, 1954 in Chicago, IL. Donna graduated from Romeoville High School class of 1972. Two months after graduating High School in Bolingbrook, IL Donna married Saverio J. Occhipinti, he survives. She was employed for eight years as a shift coordinator for Baker and Taylor, retiring in 2015. Previously, she worked at Intec for 18 years until it closed. Donna was a member of Community Christian Reformed Church of Roselawn. She enjoyed; going to festivals and craft shows, tending to her house and garden, family gatherings with her siblings, baking and cooking holiday meals. Donna is survived by; her husband, Saverio J. Occhipinti, three daughters; Julie Rayburn of Pontiac, IL, Kristy (Clayton) Call of Kentland, IN, and Diane Occhipinti of Indiana,three sisters; Tammy (Ed) Fort of Wisconsin, Edna (Ed) Jacquest of Wisconsin, Linda (Danny) Beaver of Florida, three brothers; Bobby (Karen) Neri of Illinois, Randy (Dee) Neri of Illinois and Larry (Linda) Neri of Nevada, five grandchildren and seven great-grandchildren. Donna was preceded in death by her, mother Etta (Dipadova) Neri and two sisters. Friends will be received at the Jackson Funeral Chapel in Rensselaer on Thursday, December 12, 2019 from 9:00 AM to 11:00 AM. Funeral services for Donna will be held at 11:00 AM on Thursday, December 12, 2019 at the Jackson Funeral Chapel in Rensselaer with Pastor Joel Zuidema officiating. Burial will follow at Memory Gardens in Rensselaer, Indiana. Memorials may be made to The Friends of Jasper County Animal Shelter.

The family of Donna Marie Occhipinti created this Life Tributes page to make it easy to share your memories.

Send flowers to the Occhipinti family.