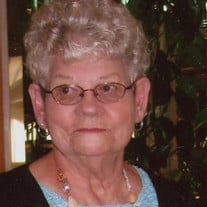 Dorothy Ashby, age 90, of Rensselaer passed away April 2, 2018, at Franciscan Health, Lafayette, Indiana. Dorothy was born in Gary, Indiana on May 20, 1927, the daughter of Andrew John and Kristina “Mary” (Johnson) Fay. Her marriage was to Robert Lewis Ashby who preceded her in death. Dorothy retired after thirty years of employment from Lakeside Laboratory in Miller, Indiana where she had been head manager of the Inspection Department. She was a member of the Calvary Baptist Church in Lake Station, Indiana. Dorothy enjoyed spending time crocheting and working puzzles. Surviving are her loving children, Steven (Amy) Cherry of Dacula, Georgia, Cathy (Steve) Shiyan of Rensselaer, Indiana and Susan Ashby of Mishawaka, Indiana; 8 grandchildren, Steven (Andrea) Cherry, Rodger (Amanda) Cherry, Christina (Steve) Hogan, Lisa, Nicole (J.T.) Trinkle, Josh, Michael and Danny, 10 great-grandchildren and one great-great grandchild. Dorothy was preceded in death by her parents, her husband Robert, a son, Bob Ashby, one great-granddaughter, one great-great grandson, five sisters and three brothers. Friends are invited to share a Time of Remembrance on Friday, April 6, 2018 from 10:00 a.m. to 11:00 a.m. at the Jackson Funeral Chapel of Rensselaer. A Memorial Services for Dorothy will follow at 11:00 a.m. on Friday with Dr. James Blanchard officiating. Burial will be at a later time in Gary, Indiana.

The family of Dorothy D. Ashby created this Life Tributes page to make it easy to share your memories.

Send flowers to the Ashby family.