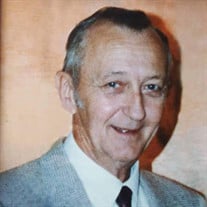 Paul Dawson, age 79, a longtime former resident of Rensselaer, passed away August 4, 2017 at his home in Cibolo, Texas. Paul was born February 3, 1938 in Lafayette, Indiana, the son of Arnett Forest and Bessie (Miller) Dawson. He was a graduate of Kouts High School. Paul marriage was to Lois Hall who preceded him in death on June 15, 2004. He retired after thirty-six years from the former Schumacher Electric Company in Rensselaer where he was a supervisor. Paul was active in his community in many ways. He was an umpire and coach for years with the Rensselaer Little League program and was a licensed official in Indiana State Athletics, officiating both volleyball and the Rensselaer Men’s Softball league. He was a former Cub Scout Den leader, helping over the years in many capacities with the Cub Scout program, particularly the annual popcorn sales and the Pinewood Derby event. Paul was a philanthropist, donating generously to the Crisis Center and other charities. Paul and Lois enjoyed traveling and spending time together. They were definite soul mates, renewing their wedding vows and were truly meant to be together. Surviving Paul is their daughter, Penny Stone of Remington, Indiana, five grandchildren, four great-grandchildren, daughter-in-law Heather Dawson, two brother’s Sam Dawson of Georgia and Carl Dawson of North Carolina, and two sister’s Charlotte Hale of South Bend, Indiana and Rita Purvis of Elkhart, Indiana. Paul was preceded in death by his parents, his wife Lois, a son, two sisters and one brother. Friends may visit with the family on Saturday, August 19, 2017 from 11:00 a.m. until 2:00 p.m. at the Jackson Funeral Chapel of Rensselaer. Graveside services will follow at 2:30 p.m. Saturday at the Weston Cemetery in Rensselaer. Memorials may be made to the family.

Paul Dawson, age 79, a longtime former resident of Rensselaer, passed away August 4, 2017 at his home in Cibolo, Texas. Paul was born February 3, 1938 in Lafayette, Indiana, the son of Arnett Forest and Bessie (Miller) Dawson. He was a graduate... View Obituary & Service Information

The family of E. Paul Dawson created this Life Tributes page to make it easy to share your memories.

Send flowers to the Dawson family.