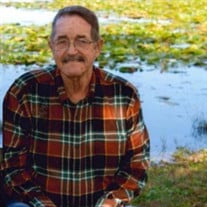 Earl Lawson Cain, age 72, a loving husband, father, grandfather and great grandfather passed away on Saturday, October 2, 2021 at Franciscan Health Lafayette East. He was born on May 7, 1949 in Momence, Illinois to Raymond Cain and Edith (Cox) Cain-Cuffle. Earl had been a resident of Morocco, IN for the last 53 years and had previously lived in Lake Village. He was a 1967 graduate of Morocco High School. Earl worked for the Indiana Department of Transportation for 42 years until his retirement in 2013. On May 25, 1968; he married Lisa Lanell Howard. Earl and Lisa raised four daughters (Candace, Courtney, Carielle and Celeste) and one son (Timothy) together. They were married for 53 loving years. Earl was a family man. He loved his wife, children and grandchildren. He spent many hours putting together bikes, swing sets, and toys. He shared his love of horses with his children and grandchildren. Teaching them to ride and do the work of having horses. Earl enjoyed spending time with his beloved dog Annie as they were “partners in crime.” He enjoyed watching TV- it could be the football game on Sunday, professional wrestling, or Heartland with his family. Earl is survived by his loving wife Lisa; his children, Candace (Tim) Bower of Kentland, IN, Courtney (John) Bronec of Bloomingdale, IL, Carielle (Mike) Bell of Morocco, IN, Timothy Cain of Lafayette, IN, and Celeste Richardson of Morocco, IN; Nine grandchildren, Nathan, Madison, John, Nicholas, Maya, Marcus, Micah, Thea, Castin; one great-grandson, Elliott; one brother, Allan (Faye) Cox of Lake Village, IN. Earl is preceded in death by; his parents; three brothers, Sherman Cain, Everett Cain and Charles Cain; one granddaughter, Jade Brooke Cain; one son-in law, Thomas Richardson. ****Due to COVID-19 Mask are to be worn at all times with 6’ of Social Distancing**** Friends may call upon the family from 2:00PM to 4:00PM on Wednesday, October 6, 2021 at the First United Methodist Church of Morocco, 203 S. Clay Street Morocco, IN. A Funeral Service will follow at 4:00PM with Pastor Wayne Williams officiating. Jackson Funeral Chapel of Rensselaer has been entrusted with the arrangements. Memorials may be made to the Newton County 4-H Horse and Pony Club.

Earl Lawson Cain, age 72, a loving husband, father, grandfather and great grandfather passed away on Saturday, October 2, 2021 at Franciscan Health Lafayette East. He was born on May 7, 1949 in Momence, Illinois to Raymond Cain and Edith (Cox)... View Obituary & Service Information

The family of Earl Lawson Cain created this Life Tributes page to make it easy to share your memories.

Send flowers to the Cain family.