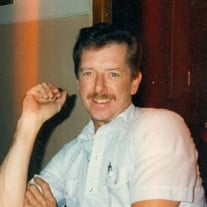 Edward William “Butch” Steiber, age 73, of DeMotte, Indiana passed away Saturday, October 5, 2019 at the Southlake Methodist Hospital. Edward was born on March 7, 1946 in Chicago Heights, Illinois; the son of Edward, Sr. and Viola (Piepenbrink) Steiber, both deceased. Edward graduated from Crete-Monee High School, the class of 1965. On August 25, 1979, in Chicago, IL, he married Ann B. Portway, who survives. Edward was a self-employed carpenter. His specialty was remodeling; however, he was a skilled craftsman in all aspects of home building. He served as a member of the National Guard Reserves. Edward was also a true and knowledgeable outdoorsman. He loved animals, especially his dogs. He liked to grill at home and raise vegetables in his garden. Spending time with his family and friends were paramount to him. He enjoyed playing card games and being around those he loved. Edward and Ann were fortunate enough to travel and take numerous cruises. The Caribbean and Mexico were some of their favorite destinations. Lastly, Edward was a committed Chicago Cubs fan. Edward is survived by his loving wife, Ann; five children, Paul Adams of Dyer, IN, Dawn (Jim) Martin of Frankfort, IL, Tammy (Krissondra) Wireman of Rensselaer, IN, Matt and David Steiber. Also surviving is a sister, Joyce (Dave) Zdych of Sidney, IL, three grandchildren, J.D. and Ryen Martin and Grace Adams. He was preceded in death by his parents, two sisters and one brother. Friends may visit with the family from 2:00 PM to 7:00 PM on Tuesday, October 8, 2019 at Jackson Funeral Service of DeMotte, IN. A Funeral Service will be held Tuesday, October 8, 2019 immediately following at 7:00 PM at Jackson Funeral Service of DeMotte. Cremation rites will be accorded following services. Memorial contributions may be made to the Friends of the Jasper County Animal Shelter or the American Cancer Society.

The family of Edward William "Butch" Steiber created this Life Tributes page to make it easy to share your memories.

Send flowers to the Steiber family.