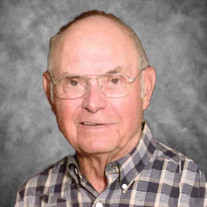 Edwin F. Nagel, 95, of Rensselaer, IN, passed away on September 3, 2021 at Autumn Trace Senior Communities in Rensselaer. Edwin was born in Rensselaer, IN on September 23, 1925, the son of Walter and Ida (Misch) Nagel. Ed graduated from Rensselaer High School with the class of 1943. He married the love of his life, Mary Lou Rockwell on February 7, 1948 in Rensselaer, IN and she survives. Ed was a life-long, self-employed farmer. He was a member of the St. Augustine Catholic Church, a past member of the Farm Bureau Co-op Executive Board and the Jasper County Soil & Water Conservation Board. He served on the Rensselaer School Board in the mid 1960s. When he wasn’t working on the farm or volunteering his time to numerous organizations, Ed enjoyed playing cards in his spare time, especially euchre and pinochle. He was also a passionate shuffleboard player. Most of all, Ed was a generous and loving family man. His family always came first and he lived every day to either support his children and care for his wife. Ed was known to have a great sense of humor; something that he never lost even in his senior years. His kind heart and devotion to his family, work and his church will be dearly missed by his family and many friends. Ed is survived by his loving wife, Mary Lou; children Sharon (Daniel) Nykiel of Lafayette, IN, Daryl (Lori) Nagel of Dallas, TX, Scott (Sherry) Nagel of Brook, IN, Helen (Curtis) Gutwein of Rensselaer, IN, and Jeff (Beth) Nagel of West Lafayette, IN; daughter-in-law, Melodye Nagel; 16 grandchildren, numerous great grandchildren and great-great grandchildren; brother, Walter (Velma) Nagel, Jr of Rensselaer, IN. He was preceded in death by his parents, Walter and Ida; son, Byron Nagel; and brother, Gerald Nagel. Private funeral services will be held at Jackson Funeral Chapel of Rensselaer and St. Augustine Catholic Church. Interment will take place at Memory Gardens Cemetery in Rensselaer. Memorial may be made in memory of Edwin Nagel to the Elara Caring Hospice or St. Augustine Catholic Church of Rensselaer.

The family of Edwin F. Nagel created this Life Tributes page to make it easy to share your memories.

Send flowers to the Nagel family.