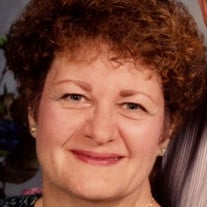 Eleanor Jean Jordan, a resident of Roselawn, formerly of Rensselaer, passed away Friday, November 12, 2021 at her residence. Eleanor was born in LaPorte, Indiana on January 16, 1943, the daughter of Earl and Herretta (Daly) Sharritt. Eleanor graduated from Elston High School with the Class of 1961. She then attended and graduated from South Bend Business College. Eleanor was previously married to Sam Antonian. She later married Richard Jordan in April of 1978 and he passed in March 2001. Eleanor formerly worked at Northway Products in Rensselaer for twenty-eight years in the shipping and receiving department before retiring. After retirement, she went on to work at Van Rensselaer Elementary School for fifteen years. She attended the Grace Pentecostal Church of God in Shelby and was a past member of the Iroquois Archery & Conservation Club in Rensselaer. Eleanor was an avid outdoorswoman. She enjoyed hunting, fishing, and camping. She was also a devoted sports fan, her favorites being the Green Bay Packers and NASCAR. Eleanor is survived by her children, Mark (Amanda Phillips) Antonian of Lafayette, IN and Elizabeth (Larry) Colee of Roselawn, IN; her stepchildren, Diana DeYoung and Vicki Carter, both of Rensselaer, IN; dear friend and companion Scottie Cook of Rensselaer, IN; brother, Robert Sharritt of Michigan City, IN; many grandchildren and great-grandchildren. Eleanor was preceded in death by; her husband, Richard; her parents, Earl and Herretta; sister, Mary Ann Dolezal; stepson, Rodney Jordan; and her first husband, Sam Antonian. Friends may call on the family at Jackson Funeral Chapel of Rensselaer on Tuesday, November 16, 2021 from 9:00 a.m. to 11:00 a.m. A funeral service will be held immediately following at Jackson Funeral Chapel at 11:00 a.m. with Pastor Terry Sprouse officiating. Interment will follow at Memory Gardens of Rensselaer. Memorial contributions may be made to Riley Hospital for Children at www.rileychildrens.org or 705 Riley Hospital Drive, Indianapolis, IN 46202.

Eleanor Jean Jordan, a resident of Roselawn, formerly of Rensselaer, passed away Friday, November 12, 2021 at her residence. Eleanor was born in LaPorte, Indiana on January 16, 1943, the daughter of Earl and Herretta (Daly) Sharritt. Eleanor... View Obituary & Service Information

The family of Eleanor Jean Jordan created this Life Tributes page to make it easy to share your memories.

Eleanor Jean Jordan, a resident of Roselawn, formerly of Rensselaer,...

Send flowers to the Jordan family.