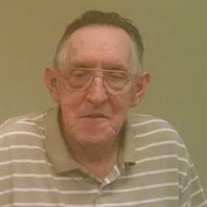 Emmett Edward Hurd, age 91, of Rensselaer, Indiana passed away February 6, 2020 at St. Mary’s Medical Center in Hobart, Ind. Born on September 16, 1928 in Castlewood, Virginia, he was the son of James and Nannie (Marshal) Hurd. Emmett was educated in the Castlewood, VA Public Schools. On April 11, 1953, in Castlewood, Virginia, he married Mary Elizabeth Hurd. Then, in 1964, Emmett and his wife, Mary moved to Rensselaer. He was a paint mixer and machine operator by trade. He was employed for twenty-four years by the former Northway Products in Rensselaer. He also, had worked for Indiana Springs during his working career. Emmett is survived by children, Jack Hurd of Brook, Ind., Diane (Steve) Russell of Virginia Beach, Virginia, and Jim (Tami) Hurd of Rensselaer, Ind; grandchildren; Travis, Jackie (Joe), Ronnie, Brooke, Charity, Ryan (Brandi), Robert (Carlin), and Drake; one sister, Evelyn Helbert; several great-grandchildren and great-great grandchildren. Emmett was preceded in death by his wife, Mary, his parents, James & Nannie (Marshal) Hurd, a daughter Elizabeth, four brothers and one sister. Friends are invited to visit with the family at Jackson Funeral Chapel in Rensselaer on Saturday, February 8, 2020 from 11:00AM to 1:00PM. Funeral services will be held at Jackson Funeral Chapel in Rensselaer on Saturday at 1:00PM with Rev. Kenin Smith officiating. Interment will follow at Weston Cemetery. Memorials may be made to your charity of the donor’s choice.

The family of Emmett Edward Hurd created this Life Tributes page to make it easy to share your memories.

Send flowers to the Hurd family.