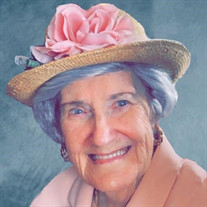 Ernestene Brown Spence, 88, passed away August 13, 2019, at White Oak Health Campus in Monticello, Indiana. She had resided in Goodland, Indiana for the past fifty years, also having lived in Niles, Michigan and Burnettsville, Indiana. Ernestene was born on July 31, 1931, in Buchanan, Michigan, the daughter of Ralph and Maxine (Collings) Brown. She was a 1949 graduate of Adams Township High School. On June 11, 1949, in Delphi, Indiana she married Dudley J. Spence who preceded her in death on November 19, 2017. Ernestene and Dudley lived and farmed near Goodland, Indiana. In 1967 Ernestene received her nursing degree. Ernestene was a registered nurse in the office of Dr. E. R. Beaver in Rensselaer for fifty years. She also had been employed at the former George Ade Hospital in Brook, Indiana. A longtime member of the First Christian Church of Brook, she was very active in both her faith life and her church. Ernestene was a loyal member of the Jordan Township Homemaker’s Club. Surviving are two sons, Michael (Pam) Spence of Commerce Township, Michigan and R. Patrick (Diann) Spence of Remington, Indiana; six grandchildren, fourteen great-grandchildren, a sister, Barbara Dillon of Flora, Indiana and a sister-in-law, Myra Brown of Logansport, Indiana. Ernestene was preceded in death by her parents Ralph and Maxine, her husband Dudley, one sister and two brothers. Friends will be received at the Jackson Funeral Chapel in Rensselaer on Monday, August 19, 2019, from 9:00 - 11:00 a.m. cdt. Funeral services will follow on Monday at 11:00 a.m. cdt at the Jackson Funeral Chapel with Pastor Chaucey Lattimer, Jr. officiating. Burial will follow at Weston Cemetery in Rensselaer. The family suggests memorials be made to the First Christian Church of Brook, 105 W. Broadway St., Brook, IN 47922.

Ernestene Brown Spence, 88, passed away August 13, 2019, at White Oak Health Campus in Monticello, Indiana. She had resided in Goodland, Indiana for the past fifty years, also having lived in Niles, Michigan and Burnettsville, Indiana. Ernestene... View Obituary & Service Information

The family of Ernestene Brown Spence created this Life Tributes page to make it easy to share your memories.

Send flowers to the Spence family.