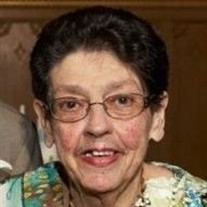 Esther E. Liersch, 91, of Rensselaer passed away on Monday, November 26, 2018, at Franciscan Health Rensselaer Alternacare. Esther was born on November 26, 1927, in Rensselaer, Indiana, to Michael and Mary Belle (Richards) Misch. A lifetime resident of Rensselaer, Esther graduated with the Class of 1945 from Rensselaer High School. She was a member of the St. John’s Lutheran Church where she had served as a Sunday school treasurer and was a member of the St. John’s Ladies Aid. Esther was a member of the former Pleasant Ridge Bunco Club. Esther was married in Rensselaer on October 25, 1952, at St. Luke Lutheran Church in Rensselaer, Indiana, to Victor P. Liersch who survives. Esther and Victor were blessed with four children, Roger (Barbara) Liersch, Steven (companion Norma Schultz) Liersch, Sandra (Jim) Miller and Cathy (Ed) Lane, all of Rensselaer. Also surviving are seven grandchildren, Abby (Spencer) Geib, Chad (Julie) Liersch, Cristen (Ryan) Way, Angela (Jason) Dobson, Cori Lane, Cayci Lane and Cody Lane, and eight great-grandchildren, with the ninth great-grandchild soon to be born. She is also survived her brother, William (Mary) Misch of Wolcott, Indiana and many nieces and nephews. She was preceded in death by her parents and a sister, Betty Dismore of LaPorte, Indiana. Esther was a loving sister, wife, and mother who loved her children and grandchildren above all else. She was filled with the joy that they brought into her life. Friends may call at the Jackson Funeral Chapel in Rensselaer on Thursday, November 29, 2018, from 2:00 - 6:00 p.m. Funeral services will be held at St. John’s Lutheran Church of Rensselaer on Friday, November 30, 2018, at 10:30 a.m. with Pastor David Mueller officiating. Burial will follow at St. John’s Lutheran Cemetery. Memorials are suggested to Franciscan Health Rensselaer Alternacare, c/o Franciscan Rensselaer Hospital, Attn: Michelle Hopkins, 1104 E. Grace Street, Rensselaer, IN 47978.

The family of Esther E. Liersch created this Life Tributes page to make it easy to share your memories.

Esther E. Liersch, 91, of Rensselaer passed away on Monday, November...

Send flowers to the Liersch family.