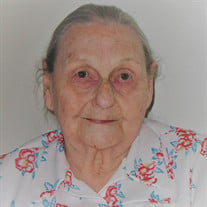 Ethel M. Stevens, age 100, of Rensselaer, Indiana, passed away Wednesday, June 27, 2018, at the Rensselaer Care Center. Ethel was born May 18, 1918, in Newland, Indiana, the daughter of Arthur Cavendish and Mary (McClain) Cavendish. She was raised by Uncle Francis G. (Frank) and Aunt Lee Etta (Joy) Cavendish from the age of 13 months in Newland. Ethel attended school in Newland and graduated from Rensselaer High School with the Class of 1937. Her first marriage was June 5, 1937, to Richard J. Shirer who passed away on April 27, 1968. On April 24, 1975, in Lafayette, Ind., Ethel married Donald L. Stevens and he passed away on May 24, 1990. Ethel was the manager of the Cavendish General Store from 1937 to 1951. She was a member of the First Christian Church (Disciples of Christ) in Rensselaer since 1938. Other memberships included the Remington Order of Eastern Star Lodge #169 since 1937, the American Legion Ladies Auxiliary Post #29 in Rensselaer since 1948, and the Fraternal Order of Eagles Lodge since 1948. Ethel enjoyed growing houseplants, collecting cookbooks and traveling. Surviving is her son, Frank R. (Wendy) Shirer of Ft. Washington, MD, two granddaughters, Lindsey, and Sarah (James) Overby, two nieces, three nephews and several great-nieces and great-nephews all living in Ohio. Ethel was preceded in death by her parents, her husband Richard Shirer, her husband Donald Stevens, a sister, Audrey Cavendish Jay, two brothers, Everett (Helen) Cavendish and Raymond Cavendish, two sister's-in-law, Marie Schultz and Bonnie (Gene) Stevens Martin, one niece and one nephew. Friends may call at the Jackson Funeral Chapel of Rensselaer Monday, July 2, 2018 from 9:00 a.m. until 11:00 a.m.. Graveside funeral services will be held at 11:00 a.m. Monday, July 2, 2018, at Weston Cemetery of Rensselaer with Rev. Elizabeth Hartman officiating. In lieu of flowers the family suggests donations to the First Christian Church of Rensselaer Building Fund.

Ethel M. Stevens, age 100, of Rensselaer, Indiana, passed away Wednesday, June 27, 2018, at the Rensselaer Care Center. Ethel was born May 18, 1918, in Newland, Indiana, the daughter of Arthur Cavendish and Mary (McClain) Cavendish. She was... View Obituary & Service Information

The family of Ethel M. Stevens created this Life Tributes page to make it easy to share your memories.

Send flowers to the Stevens family.