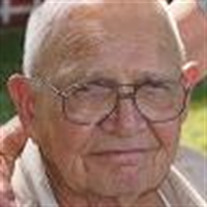 Eugene C. Davis, age 91, of DeMotte, IN passed away Saturday, July 29, 2017 at Oak Grove Christian Retirement Village. He was born January 23, 1926 in Chicago Heights, IL to Emerson T. and Marie (Gust) Davis. Eugene married the love of his life, Evelyn M. Packingham on May 19, 1956 in Harvey, IL and she preceded him in death on Aug. 31, 2014. He was retired from Illinois Bell after 35 years of service. Eugene proudly served in the US Navy. Eugene is survived by his loving children, Ellen (John) Terpin of Cumming, GA and Carol (Kevin) DeFries of DeMotte; a brother Emerson (Clo) Davis of MA; a sister Marilyn Campbell of Crete, IL; a sister in law Louise Davis of Glenwood, IL; 5 grandchildren, Matthew DeFries, Angela (Sam) Madson, Mark DeFries, Luke Terpin and Kelly Terpin Eugene was preceded in death by his parents, wife, Evelyn, a brother Robert and 2 sisters, Shirley Holt and Evelyn Worley Friends may call at the Jackson Funeral Service of DeMotte on Saturday, August 5, 2017 from 4 to 6 PM. Funeral Services will follow at 6:00 PM with Pastor Jared Raebel officiating. Per Eugene’s wishes cremation will follow. A private burial will be held at a later date at the Cedar Park Cemetery in Chicago, IL. Memorial contributions may be made to the Wounded Warriors.

The family of Eugene C. Davis created this Life Tributes page to make it easy to share your memories.