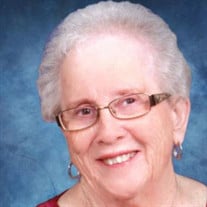 Evelyn R. Erb, age 90, a resident of Rensselaer, Indiana, passed away on April 8, 2021 at George Ade Memorial Healthcare Center. Evelyn was born in Rensselaer, IN on June 15, 1930, the daughter of Walter and Sarah (Holmes) Erb. A lifetime resident of Rensselaer, Evelyn graduated from Rensselaer Central High School with the Class of 1948. Evelyn worked at Production Credit as a bookkeeper for 27 years. Evelyn enjoyed traveling with her twin sister, Marilyn, where they had many adventures, visiting and sightseeing places in the US, Hawaii, and Europe, specifically Friesenheim, Germany. One of their most memorable travels was out to the Air Force Academy in Colorado Springs to see their cousin, Ronald Herre, graduate from the Academy. Evelyn and her sister were also devoted St. Joseph’s College Puma basketball fans and enjoyed attending home games together. She and Marilyn liked to watch and follow NASCAR as well. Evelyn was a member of the First Christian Church of Rensselaer. For many years she served in the church kitchen preparing meals for the Rensselaer Rotary Club. Evelyn is survived by numerous cousins and special friend, Betty Lintner. Evelyn was preceded in death by her parents, infant brother Doyle Erb, and twin sister, Marilyn Erb. Friends may call upon the family at Jackson Funeral Chapel on Wednesday, April 14, 2021 from 10:00 a.m. to 12:00 p.m. Funeral Services for Evelyn will be held at Jackson Funeral Chapel at 12:00 p.m. on Wednesday with Reverend Elizabeth Hartmann officiating. Interment will follow at Weston Cemetery in Rensselaer, IN. Jackson Funeral Chapel of Rensselaer has been entrusted with the arrangements. Memorial contributions may be made to First Christian Church or the charity of the donor’s choice.

Evelyn R. Erb, age 90, a resident of Rensselaer, Indiana, passed away on April 8, 2021 at George Ade Memorial Healthcare Center. Evelyn was born in Rensselaer, IN on June 15, 1930, the daughter of Walter and Sarah (Holmes) Erb. A lifetime... View Obituary & Service Information

The family of Evelyn R. Erb created this Life Tributes page to make it easy to share your memories.

Send flowers to the Erb family.