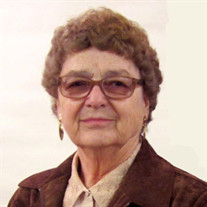 Faye Louise Spall Clarke, age 83 of Rensselaer, IN passed away Friday, October 6, 2017 at her home. Faye was born August 30, 1934 in Brook, IN to the late Russell and Ardis (Reading) Spall. The Spall family, which included Russell, Ardis, Faye, Albert and Jerry Spall, moved to Newton Township in Jasper County in 1946. Faye began 7th grade at the North Newton Township country schoolhouse just down the road from their home. During that first week of school, she met James Clarke in the car pool "bus" home. They became fast friends. They began dating after Faye turned 16. Jim was older than Faye and after high school, he went into the Air Force. After Faye graduated high school, Jim came home over the Fourth of July and proposed. On July 28, 1952, Jim and Faye married at the Lowry Air Force Base in Denver, Colorado. They returned to the Rensselaer area in July 1953. Faye worked at the former State Bank of Rensselaer. Jim and Faye bought a small farm south of town and built their home and moved in, in1963. Here, they raised two children. In 1970, Jim and Faye bought an additional 140 acres north of town in their old neighborhood near the old North Newton Township School. They farmed both farms for many years. Faye left the State Bank in 1977, when she began working at Jasper County REMC in their billing department. She retired from REMC in 1994. Together, Jim and Faye enjoyed camping and fishing and Faye also enjoyed crocheting and reading. In 1997, Jim and Faye began attending Faith Christian Tabernacle and donated land for the church building in 2000. They have been faithful members of the church for the past 20 years. Faye Spall Clarke is survived by her beloved husband of 65 years marriage, Jim Clarke, her son, Dennis (Alicia Berning) Clarke, her daughter, Debbie (Brian) Clarke Voss, six grandchildren, Aaron (Meghan Earhart) Voss, Micah (Shelby Bayless) Voss, Mary Voss (Russell) Ratcliff, Ashley Clarke (William) Minter, James (Kelsey Haun) Clarke, Caleb (Kim Black) Voss, nine great-grandchildren and a brother, Albert (Lea Anderson) Spall. Friends may visit with the family at the Jackson Funeral Chapel of Rensselaer on Monday, October 9, 2017, from 4:00 to 7:00 P.M. (CDT). Funeral services for Faye will be held at the Jackson Funeral Chapel of Rensselaer on Tuesday, October 10, 2017 at 10:00 A.M. (CDT) with Dr. James Blanchard officiating. Interment will follow at Memory Gardens of Rensselaer. Memorials may be made to the Faith Christian Tabernacle Church, 4911 W. 1100 S., Rensselaer, IN 47978.

Faye Louise Spall Clarke, age 83 of Rensselaer, IN passed away Friday, October 6, 2017 at her home. Faye was born August 30, 1934 in Brook, IN to the late Russell and Ardis (Reading) Spall. The Spall family, which included Russell, Ardis,... View Obituary & Service Information

The family of Faye Louise Clarke created this Life Tributes page to make it easy to share your memories.

Faye Louise Spall Clarke, age 83 of Rensselaer, IN passed away...

Send flowers to the Clarke family.