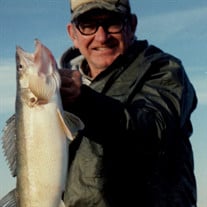 Forrest E. “Fuzz’ Campbell, age 82, of Rensselaer passed away October 28, 2017 at The Springs in Lafayette, Indiana. Fuzz was born in Gifford, Indiana on October 5, 1935, the son of Ernest J. and Dorothy (Timmons) Campbell. Fuzz was a 1955 graduate of Wheatfield High School in Wheatfield, Indiana. He was a carpenter by trade, retiring after 35 years at Ford Motor Company in Chicago Heights, Illinois. He enjoyed being able to work alongside his father helping out on the family farm. An outdoorsman, Fuzz enjoyed time spent hunting and fishing with his family and friends and especially liked fishing at Red Lake, Canada. He was a sports enthusiast, having had much success playing sports during high school, and enjoyed playing softball for the Parr Elevator Men’s Softball team. Fuzz liked to be active in local events and had worked as an election voting booth volunteer. On July 28, 1956, in Gifford, Indiana Fuzz and Linda Lou Green were married. Linda preceded him in death on September 18, 2011. Fuzz and Linda were the proud parent’s of three children, Melanie (Klayton Kohley) Wright, Susan (Jim) Phillips and Mark (Stacey) Campbell, all of Rensselaer, Indiana; grandparents to Rhiannon Wright, Caylyn (Reilly) Murphy, Cameron Phillips, Ali Phillips, Halston Campbell and McClain Campbell and great grandparent’s of six. Also surviving is his brother, Jerry (wife Doris) Campbell of Gifford, Indiana. Fuzz was preceded in death by his parents, his wife Linda, three brothers, one sister and his Boarder Collie “Pie”. Friends may visit with the family at the Jackson Funeral Chapel of Rensselaer on Wednesday, November 1, 2017 from 2:00 - 6:00 p.m. CST. Services will be held at 6:00 p.m. CST on Wednesday at the Jackson Funeral Chapel of Rensselaer with Richard Stoll officiating. Memorials may be made to your favorite Hospice provider or to the Rensselaer Central High School Football program at Rensselaer Central High School.

The family of Forrest "Fuzz" E. Campbell created this Life Tributes page to make it easy to share your memories.

Send flowers to the Campbell family.