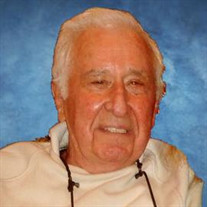 Francis Eugene O’Brien, MD, age 91, of Rensselaer, Indiana, passed peacefully at his home on Friday, August 11, 2017. Dr. O’Brien was born in Evansville, Indiana on February 12, 1926. He was the eldest of three boys of the late Frank and Hazel née Brammer O’Brien. On June 16, 1951, in Terre Haute, Indiana, Dr. O’Brien married the love of his life, Barbara Anne Taylor, who passed away July 25, 2005. Barbara and he moved to Rensselaer shortly thereafter; where they raised their family of five children. Dr. O’Brien attended Indiana State University, Terre Haute for one year, then was drafted into the United States Army where he served his country for four years during World War II and was injured in the Battle of the Bulge. He was a twice recipient of the Purple Heart Award. After his service in the army, he returned to graduate from Indiana State University and Indiana University Medical School. He performed his residency at Detroit General Hospital. Dr. O’Brien began his family practice in Rensselaer in the former Medical Arts Building. He retired in 2003 after 48 years of caring for his patients. He became a lifetime Diplomat of the American Academy of Family Practitioners and was an Alpha Omega Alpha or member of the top 5% of his graduating class from Indiana University Medical School. He was a member of St. Augustine Catholic Church and a past member of the Knights of Columbus. He enjoyed golfing with friends and family and being a member of the Curtis Creek Country Club. Dr. O’Brien is survived by his five children, Thomas J. O’Brien, JD of Lafayette, Indiana, Dr. Marianne Nelson of Rensselaer, Patrick (Janice) O’Brien, JD of Greenwood, Indiana, Dr. Mark S. O’Brien of Waterloo, Indiana and Kathleen A. (Keith) Hoovis of Spring Grove, Illinois. He is also survived by 10 grandchildren and one great-granddaughter, the light of his life, Dylan Plascak. He was preceded in death by his parents, his wife and two brothers. Friends are invited to visit with the family on Wednesday, August 16, 2017 from 3:00 PM to 8:00 PM at Jackson Funeral Chapel of Rensselaer. A funeral mass will be held on Thursday, August 17, 2017 at 10:00 AM at St. Augustine Catholic Church, Rensselaer. Interment will follow at Mt. Calvary Cemetery with full military rites. Memorial contributions may be made to St. Augustine Catholic Church or the charity of the donor’s choice.

The family of Dr. Francis Eugene O'Brien created this Life Tributes page to make it easy to share your memories.

Send flowers to the O'Brien family.