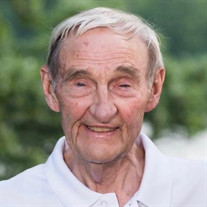 Franklin D. Wright, 85, of Rensselaer, Indiana, passed away on September 3rd, 2021, at his home in Rensselaer. He was born in State Line City, IN, on March 1st, 1936, the son of Hyta and Ina (High) Wright. Frank graduated from Covington High School, class of 1954, and then attended Purdue University, where he graduated in 1958 with a B.S. in Agricultural Business Administration. While in high school, he met and started dating the love of his life, Patricia Joan Smith. The couple were married September 1st, 1957, and recently celebrated 64 wonderful years of marriage. Growing up in a farming family, Frank’s lifetime work was in the farm credit and banking industry. He attended and graduated from the University of Wisconsin Banking School in 1979. He finished his career as President and Chief Executive Officer at Bank One of Rensselaer (now First Merchants Bank) retiring January 1st, 1997. He also previously served in the Illinois National Guard and the United States Army. Frank was a member of Trinity United Methodist Church of Rensselaer, where he sang in the Chancel Choir and served as chairman of the Church Administrative Committee and various other committees. For years, at the Christmas Eve service, he could be heard singing “Oh Holy Night,” accompanied by Pat on piano. Those who heard them often say there wasn’t a dry eye in the sanctuary when he was finished. The couple also sang and played for numerous weddings and funerals through the years. Other organizations and groups he served on include Rotary Club of Rensselaer, Jasper County Library Board, Jasper/Newton Foundation Board, Bombers for Academic Excellence, and the Rensselaer Central High School Building Trades Board. Frank also served on the Curtis Creek Country Club Board of Directors. An avid golfer, he loved to spend Thursday afternoons out at the course with his friends during men’s’ league. In retirement, he found great joy golfing with his friends and family. He also became an avid woodworker during his retirement years, making furniture for his kids, grandkids and for members of the community in need. While attending Purdue Frank was a member of the Alpha Gamma Rho Fraternity, and he sang in the Purdue Glee Club, where he appeared on The Ed Sullivan Show with the group. He was a Master Mason at Mound Lodge in State Line City, Indiana, and later transferred to Rensselaer Prairie Lodge #125 F&AM. Frank is survived by his loving wife, Patricia; son Michael Wright of Naperville, IL; son Scott (Sharron) Wright of Carmel, IN; daughter Juliann (Fidel) Mercado of Carmel, IN; sister-in-law Sharon Wright of State Line City, IN; eight grandchildren (who affectionally called him “Poppy”); and numerous nieces and nephews. He is preceded in death by his parents and four brothers. A celebration of life and memorial service will be held at a later date. Memorial contributions may be made to the Trinity United Methodist Church 107 E. Angelica Street Rensselaer, Indiana 47978.

Franklin D. Wright, 85, of Rensselaer, Indiana, passed away on September 3rd, 2021, at his home in Rensselaer. He was born in State Line City, IN, on March 1st, 1936, the son of Hyta and Ina (High) Wright. Frank graduated from Covington High... View Obituary & Service Information

The family of Franklin D. Wright created this Life Tributes page to make it easy to share your memories.

Franklin D. Wright, 85, of Rensselaer, Indiana, passed away on...

Send flowers to the Wright family.