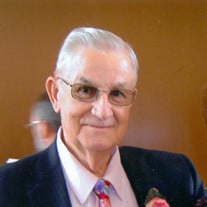 Frederick “Fred” Louis Boissy, Jr., age 87, of DeMotte, entered into Heaven on November 27, 2020 in the comfort of his home while the love of his life, Dorothy, held his hand. Fred was born in Chicago, Illinois, on April 28, 1933 and his parents were Fred Sr. and Mildred (Dunovsky) Boissy. He graduated from DeMotte High School, Class of 1952, and served in the United States Army for 2 years as a Corporal. Fred worked at Ameritech Telephone Co. for 38 years before he retired. As a lifelong resident of DeMotte, Fred was very active and well known in the community. He was appointed to the First Kankakee Valley school board, was elected 4 times as the Keener Township Trustee serving 16 years, and elected 4 times as Jasper County Commissioner serving district one for 16 years. In 1988, he received the Sagamore of the Wabash from Governor Orr. Fred was instrumental in developing the Town and Country Days Parade, currently the Touch of Dutch. He was honored as the Touch of Dutch Citizen of the Year in 1997. In the years after his retirement, Fred was active on the Board of Direction at Oak Grove Christian Retirement Village, serving some of those years as president. He led various activities, such as weekly banana bingo and the yearly ice cream social for the residents. Fred was a former member of the DeMotte/Kankakee Valley Rotary Club and American Legion Post #440. In his spare-time he enjoyed cutting the grass at Grace Fellowship Church, loved to fish and camp with his wife and friends, and was a faithful Cubs fan who never missed a game. In 2016, Fred was thrilled to witness them win a World Series! He was one of the founding members of Grace Fellowship Church and was a devoted member for 28 years. Fred was also known for his practical jokes and sense of humor. He was never at a loss for a good joke and punchline. It was not uncommon for him to make phone calls just to tell you a joke and hang up after the recipient laughed by saying, “See you later.” He always knew how to make people laugh, or at least attempted to. Fred was devoted to his family, but it was made abundantly clear that the one he adored the most was, his loving wife, Dorothy “Dot”. Before Fred would ever leave home he always made sure to kiss her and tell her that he loved her. The love they had for one another is an example of true unconditional love. Fred also loved Jesus as his Lord and Savior and would often reflect of how God directed the path of his life. For most of his life, Fred believed he was an only child, but after his son, Fred III conducted an extensive genealogical search, Fred discovered that he had a few siblings. Fred thoroughly enjoyed getting to know his half siblings and other family members later in life. Fred is survived by his wife of 62 years, Dorothy (Ksenak); his children: Rose (Ron) Wierzba, Fred (Bonnie) Boissy, Kathy Boissy, Brian (Dana) Boissy, and John (Jen) Boissy; 10 grandchildren and 6 great-grandchildren. He is preceded in death by his parents and granddaughter, Mallory Wierzba-Jarvis. Friends and family may visit at Jackson Funeral Service of DeMotte on Saturday, December 5, 2020 from 11:00 AM – 2:00 PM. A Memorial Service will immediately follow on Saturday at 2:00 PM at Jackson Funeral with Fred Boissy III officiating. Social distancing must be observed and masks must be worn at all services due to the current pandemic. Interment will be private. Memorial contributions may be made to Oak Grove Christian Retirement Village.

The family of Frederick "Fred" Louis Boissy Jr created this Life Tributes page to make it easy to share your memories.

Send flowers to the Boissy family.