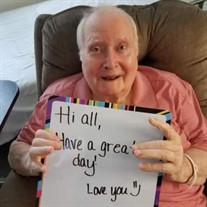 George Eugene Clemans, age 87, of Rensselaer, Indiana, passed away Thursday, December 3, 2020 at George Ade Memorial Health Care Center. He was born in Jasper County, Indiana on March 14, 1933, the son of Charles P. & Ethel May (Watson) Clemans. George’s first marriage was to Peggy Jo DeMoss on August 18, 1956 in Wheatfield, Indiana. She preceded him death on May 20, 1983. His second marriage was to Ethel M. Slusher, and she survives. George worked and retired from the Ford Motor Stamping Plant. He was a veteran of the United States Navy. He loved to watch professional wrestling and cheer for his favorite wrestler, “The Undertaker.” He always enjoyed having a lively conversation involving politics and kept up on current events by reading the newspaper, every day. Growing up during the depression, George knew the value of being prepared and would often stockpile food and vegetables, just in case. George is survived by his wife, Ethel M.; two children, Gary G. Clemans of Rensselaer and Tammy Schultz of Brook, Indiana and one sister, Delores Clemans of Monon. He is also survived by stepchildren, Shirley (David) Howard, Clinton Bailey and Charlotte (Daniel) Wilson, eleven grandchildren and twelve great-grandchildren, numerous nieces, and nephews. George was preceded in death by his parents, two sons, Ricky and Charlie Clemans, one daughter, Annie Parks, one step-son, Challie Bailey, seven brothers, three sisters, and one great-grandson, Johnathan Hasty. A Graveside Service for George will be held at Smith Cemetery on Thursday, December 10, 2020 at 10:00AM.

The family of George Eugene Clemans created this Life Tributes page to make it easy to share your memories.

Send flowers to the Clemans family.