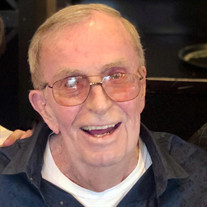 George Hoffman, Jr., age 80, passed away on February 21, 2020, surrounded by his loving family. He was born April 12, 1939, in DeMotte, IN, the son of George, Sr. & Jennie (Walstra) Hoffman. He is survived by his wife of more than 56 years, Irene Kay (Dusek), their three children, Dawn (Kevin) VanderMolen, Jay (Camilla) Hoffman, and Mike (Melanie) Hoffman, and their seven grandchildren: Jamie VanderMolen, Derek VanderMolen, Jasen VanderMolen, Gabrielle Hoffman, Sarah Hoffman, Justin Hoffman, and Matthew Hoffman. George also is survived by sisters Evelyn Dykhuizen and Janice Schlarp, and preceded in death by siblings Florence Hamstra, William, Kenneth, and Larry Hoffman. After growing up in DeMotte and attending DeMotte High School, George enlisted in the United State Army in October 1962 and was honorably discharged on October 31, 1964. On December 14, 1963, in DeMotte, he married Irene Kay Dusek. George was raised in the First Reformed Church at Dutch Corners, where he attended his entire life. He worked residential, commercial and then industrial construction, and retired after a career as a Superintendent and a proud member of Carpenters Local Union No. 1485. His kindness and calm countenance made a lasting impression on every person he met. His grandchildren were his pride and joy, and he and Irene attended many school and sporting events, graduations, and enjoyed loud and raucous family events throughout the years, where he often would sit quietly, take it all in, and smile at the family he helped create and mold. A calling of family and friends will be held on Monday, February 24, 2020 from 3:00 to 8:00PM at Jackson Funeral Service of DeMotte. His funeral service will be held on Tuesday, February 25, 2020 at 10:30AM at First Church DeMotte with Pastor John Hill officiating. Interment will follow at Holland Cemetery, DeMotte. George’s family requests memorials be made to the American Cancer Society.

The family of George Hoffman Jr. created this Life Tributes page to make it easy to share your memories.

Send flowers to the Hoffman family.