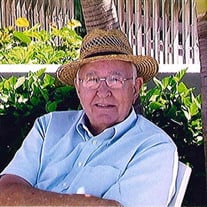 George James Tonner, 96, of Rensselaer, Indiana, passed away peacefully on June 8, 2022. Born on September 7, 1925, to the late Callista (Reiff) and Paul Tonner, he spent his childhood with his six brothers and three sisters. He attended St. Augustine Catholic School, St. Joseph’s Academy and Butler University. In 1943, George enlisted in the U.S. Army Air Corps during World War II. He earned his wings as a Navigator on the B-24 bomber along with the rank of Lieutenant. After the war, he became co-owner and operator of Superior Cleaners and later Tonner Motors, both of Rensselaer. In 1952, he married the love of his life Elizabeth “Betty” Feldhaus who survives. George lived a life of service to many organizations. He was a life-long member of St. Augustine Catholic Church and twice served as parish council president. He belonged to the Rensselaer Rotary Club for over 50 years and was a past president. He was a member of the American Legion Post 29 for 70 years and a former bugler in the 50-member Drum & Bugle Corps. George served on boards for the St. Joseph’s College Presidential Fellows and was a charter member of the Jasper County Habitat for Humanity. He loved playing golf and was a member of Curtis Creek Country Club for over 70 years, scoring aces on two separate occasions. He served as a Boy Scout merit badge counselor to Rensselaer troop 152 and was an officer of the newly formed Chamber of Commerce in 1947. In addition to golf, George enjoyed working daily crossword puzzles and playing with his golden retrievers, Rex and Duke. In 2004, George and Betty were selected as co-grand marshals of the Lil’ Cousin Jasper Festival. George led a Christian life, and his family meant everything to him. He is survived by his wife Betty, their five children: Jeffrey (Cynthia) Tonner of Phoenix, Gregory (Kathy) Tonner of Chicago, Edward “Ned” (Shari) Tonner of Rensselaer, Ann (Timothy) Finnegan of Lake Forest, IL and Christopher (Julie) Tonner of Riverwoods, IL. 17 grandchildren: Matthew, George Andrew, David, Eileen, Michael, Joseph, Paul, Elizabeth, Laura, Emily, Joshua, Colette, Lauren, Nicholaus, Graham, Michael, and Katherine. Great-grandchildren Cora, George, and Hallie. Brothers, Donald, twins Harold and Gerald, sisters, Carolyn Grube and Suzanne Wright. He was preceded in death by his parents, sister Pauline Cody, brothers Leo, Robert, and Arthur, and twin infant daughters Mary Ann and Mary Elizabeth. Visitation will be held at Jackson Funeral Chapel on Monday, June 13, 2022, from 2:00 - 5:00 PM CDT with Rosary Service at 5:00 PM. A Funeral Mass will be held on Tuesday, June 14, 2022, at 10:00 AM CDT at St. Augustine Catholic Church, Rensselaer, with Father Joshua Bennett officiating. Interment will follow at Mt. Calvary Cemetery, Rensselaer, with full military rites. Memorial contributions may be made to Fuller Center for Housing (formerly Habitat for Humanity) or St. Augustine Catholic School.

George James Tonner, 96, of Rensselaer, Indiana, passed away peacefully on June 8, 2022. Born on September 7, 1925, to the late Callista (Reiff) and Paul Tonner, he spent his childhood with his six brothers and three sisters. He attended St.... View Obituary & Service Information

The family of George James Tonner created this Life Tributes page to make it easy to share your memories.

Send flowers to the Tonner family.