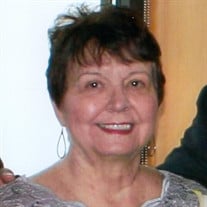 Gloria Ruth De Leeuw, age 82, of DeMotte, Indiana passed away Friday, October 4, 2019 at the William J. Riley Memorial Residence in Munster. Gloria was born at home on August 27, 1937 in Highland, Indiana; the daughter of Jacob and Gertrude (Scott) Auwerda, both deceased. Gloria graduated from Illiana Christian High School. On June 4, 1966, in Highland, Indiana, she married the love of her life, Dennis John De Leeuw. He passed away on September 2, 2014. Together, they raised two sons. Previously to moving back to DeMotte, Gloria and her husband, Dennis, moved to Florida where she worked in the insurance field. Family and friends were most important to Gloria. She loved spending time with her grandchildren and cherished every moment with them. Coming from a large family, Gloria also devoted time to her siblings & nieces and nephews. When she was with her friends, Gloria enjoyed playing games and cards, especially pinochle. In their later years, she and Dennis traveled and spent their winters in Florida. Gloria also enjoyed her membership in the First Christian Reformed Church in DeMotte. Gloria is survived by her two sons, David (Elaine) De Leeuw of Tarpon Springs, FL and Jack (Denise) De Leeuw of Highland, Indiana. Also surviving are siblings, Grace Auwerda of Highland, IN; Henry “Hank” (Judy) Auwerda of DeMotte, IN; Karen (Gregory) Parker of DeMotte, IN; Trudy (Wayne) Boss of Wheatfield, IN; Jacalyn (William) Needles of Wheatfield, IN; Kathleen (Harry) Ference of DeMotte, IN and Lorraine Auwerda of Highland, IN; sister-in-law, Patricia Zandstra; two granddaughters, Mary and Sophia De Leeuw; two step-granddaughters, Michelle Damore and Lindsey (Curtis) Stammis. She was preceded in death by her parents, husband Dennis, one step-grandson, Michael Damore and one brother Donald Auwerda. Friends may visit with the family from 3:00 PM to 8:00 PM on Wednesday, October 9, 2019 at Jackson Funeral Service of DeMotte, IN. Funeral Services will be held on Thursday, October 10, 2019 at the First Christian Reformed Church in DeMotte at 10:30 AM with Pastor Jim Alblas officiating. Interment will follow at Holland Cemetery. Memorial contributions may be made to the Hospice of Calumet Area, 600 Superior Ave., Munster, IN 46321.

The family of Gloria Ruth De Leeuw created this Life Tributes page to make it easy to share your memories.