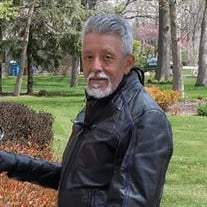 Gregory M. Paz Jr., age 69, of DeMotte, Indiana passed away tragically on Tuesday, June 4, 2019 in Bethesda, Maryland. Gregory was born in East Chicago, Indiana on December 13, 1949 to Gregory M. Paz Sr. and Aurora (Marquez) Paz-Alvarez. He was a graduate of Roosevelt High School, the Class of 1967. On May 11, 1974, Gregory married the love of his life, Jerri (Gooch) who survives. Gregory retired in 2014 from the steel mills as a mechanic. He is a proud veteran who served in the U.S. Army. Gregory was affiliated with St. Cecilia Catholic Church of DeMotte and a member of the American Legion Post 17 of Hammond. He loved building bird houses with his grandchildren when they were younger, spending time with his family, and riding his motorcycle for charity. There is nothing he wouldn’t do for his family. Gregory is survived by his loving family; wife, Jerri Paz of DeMotte; mother, Aurora Paz-Alvarez of Griffith; sons: Michael (Veronica) Paz, Christopher (Nanette) Paz of Remington; Jason (Jennifer) Paz of Whiting; grandchildren: Elisabeth, Isaiah, Julian, Celeste, and Cesar; siblings: Robert Paz, Mary Ellen Paz, Raymond Paz, Ralph Alvarez, Joe Alvarez, Mike Alvarez, and Josephine Alvarez. Gregory was preceded in death by his father, Gregory Sr., brothers: Rick Paz and Frank Alvarez. Friends may call at Jackson Funeral Service of DeMotte on Tuesday, June 11, 2019 from 2:00 to 8:00 PM. A Funeral Service will be held at Jackson Funeral Service on Wednesday, June 12, 2019 at 10:30 AM with Derald Ailes officiating. Interment will follow at Chapel Lawn Cemetery in Schererville. Memorial Contributions may be made to Wounded Warriors.

The family of Gregory M. Paz Jr. created this Life Tributes page to make it easy to share your memories.

Send flowers to the Paz family.