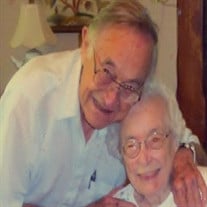 Hal G. Gray released life on February 8, 2019. Hal was born July 6, 1926 on his grandmother's farm one mile north and one mile west of Windfall, Tipton County, Indiana. He was the son of James L. and Fern Mitchell Gray. His family moved to Tipton when he was 9 months old. He graduated from Tipton High School with the Class of 1944. He started working at age 11 when he had a paper route and washed windows for downtown stores on Saturday. During his high school years he worked one summer for the Continental Can Company in Elwood, two summers on a farm and after graduation for the Perfect Circle Piston Ring Company. He often related, in an amusing way, that he wondered how many planes crashed during WW II because of the rings that he turned out on his lathe. He often imagined that just before the plane hit the water the pilot said "Damn the guy that made these rings." He was inducted into the army in 1944 and had basic training in Camp Fannin near Tyler, Texas. He served with the 36th Infantry Division in central and southern Germany and later transferred to the 771st Tank Battalion. He was discharged in 1946 and worked a few months at the ALCOA factory in Lafayette, Indiana. He earned his Bachelor's Degree from the Jordan Conservatory of Music in Indianapolis in 1950 and his Master Of Music Degree in 1955 from the Butler University School of Music. He spent a year at Wabash College as Chapel Organist and accompanist for the Wabash Glee Club. He often said "I didn't make much money but oh what a wonderful year that was." After his Wabash experience he was employed for two years in Frankfort, Indiana as a clerk in the Westbound Yard Office for the old Nickel Plate Railroad. He enjoyed the excitement of watching the trains arrive and depart the yard. The trains were all steam at that time. In 1952 he came to Rensselaer and taught music in the public schools for 35 years and at the same time worked in the City Parks and served as organist for the First Christian Church of Rensselaer for 28 years. He retired from teaching in 1986 and then took the position as Superintendent of the Rensselaer Park Department and did retire in 1991. He was a member of the First Christian Church of Rensselaer and held many posts during his long association. He was especially pleased when the congregation voted him the honor of being an "Elder Emeritus." He was also a seventy year member of the Masonic Clinton Lodge No. 54 in Frankfort, Indiana. On August 20, 1955, he married Marcia Parkison in her parent's farm home in Gilliam Township, Jasper County, Indiana. Marcia passed away on October 19, 2015. They celebrated their 60th wedding anniversary on August 20, 2015 when the family was here for their summer reunion. He was preceded in death by his wife, a sister, Eileen Gray Higgins of Tipton Indiana and a brother John T. Gray of Tampa, Florida and a nephew, Robert Higgins of Noblesville. Surviving him is a daughter, Eileen Ann (James) Phegley of Rensselaer and a son, Kenton (Mary Ellen) Gray of Winthrop, Massachusetts. He was blessed with five grandchildren, Patrick, Cory and Shannon Dowds and Sean and Michael Gray. He is also survived by a nephew, Hal Gray Higgins of Peona, Arizona. He has two great grandchildren, Callie Gray and Madden James and was so pleased to have her middle name in his honor. He often admitted that they were the most beautiful children. · He and Marcia often visited their son in Winthrop, Massachusetts (in the Boston area.) Their son lives just a block from the Atlantic Ocean and they loved visiting the beach and watching the waves roll in and the gulls flying all about. They decided that in their next life they would come back as beachcombers so Hal's family now surmises that he has now jointed Marcia on Winthrop Beach. He had many hobbies. Among them was painting with water colors, photography and had a dark room set up in his home. He loved classic automobiles of the 1930's and 40's and assembled model kits of over 70 of these cars. He also fed the birds, squirrels and rabbits for sixty years enjoying identifying them as they fed in his yard. He was always pleased when a new species would arrive at his feeder. Hal so loved Rensselaer and enjoyed his life here with his family and friends. According to Hal’s wishes there will be no services at this time. A Celebration of Life will be planned for a later date.

Hal G. Gray released life on February 8, 2019. Hal was born July 6, 1926 on his grandmother's farm one mile north and one mile west of Windfall, Tipton County, Indiana. He was the son of James L. and Fern Mitchell Gray. His family moved to... View Obituary & Service Information

The family of Hal George Gray created this Life Tributes page to make it easy to share your memories.

Send flowers to the Gray family.