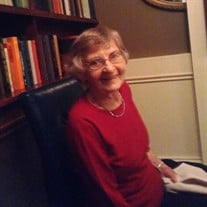 Helena P. Davis of Rensselaer, Indiana passed away December 27, 2018. Helena was born in Coffeyville, Kansas on November 9, 1922, the daughter of the late Gus G. and Genevieve (Packwood) Pointer. Helena was a graduate of Ursuline Academy in Paola, Kansas. During her years at Ursuline, Helena excelled at piano and after graduation enrolled at the College of Paola. After two years at Paola she worked in the executive office of Pillsbury Mills in Kansas City, Missouri. On November 27, 1947 Helena married Michael E. Davis. The Davis family moved to Rensselaer, where Michael joined the faculty at St. Joseph’s College in 1952. After a short period from 1954-1957, during which time Michael worked as a geology consultant in Denver, Colorado the family returned to Rensselaer in 1958 where they remained and became active members of the St. Joseph’s College and Rensselaer community. Helena was a devoted wife and the mother. After raising their six children, Helena joined the staff of the Admissions Office at St. Joseph’s College in 1975. During that time, she never gave up a dream of completing her college degree and resumed her music studies at St. Joseph’s while working full-time. Because of her passion for music, she often practiced early before work and at the lunch hour. She also found time at the close of her workday to tutor other piano students at the college. Helena achieved her dream on May 4, 1986 when she graduated with a Bachelor of Science in Music degree. In June 1986 she was honored with the Schuyler Robinson Award for Excellence in Applied Music as demonstrated in public performance. Encouraged by her musical mentor, Dr. John Egan, she continued her love of music, by offering a series of classical concerts to the community in the chapel of St. Joseph’s College. Helena was a member of the St. Augustine Catholic Church and a St. Joseph’s College Fellow. She was a regular member of several bridge clubs and was a member of Beta Sigma Psi and Tri Kappa sororities. In her earlier retirement years she volunteered at the Jasper County Hospital gift shop. Surviving are her loving children, Catherine Davis Flynn Tymkow of IL; M. Patricia (husband, Mike)Brown of AZ; Michael A. ( wife, Mara) Davis of IN., Karen Davis (husband, Patrick) Marks of GA.; Lisa Davis of TX, and Timothy ( wife, Sally) Davis of TX; nine grandchildren; four great grandchildren; two nephews and three great nieces. Helena was preceded in death by her parents, husband Michael of 69 years, two sons-in-law, Richard Flynn and Tony Tymkow, a sister Elinor Martin, and brother, William Pointer. Friends will be received by the family at St. Augustine Catholic Church of Rensselaer on Wednesday, January 2, 2019, from 9:00 to 11:00 A.M. Funeral Mass will follow at St. Augustine Catholic Church, Rensselaer, Indiana at 11:00 A.M. on Wednesday, January 2,2019 with Fr. Don Davison officiating. Burial will follow at Mt. Calvary Cemetery, Rensselaer, Indiana. Those who wish to make a donation in honor of Helena to Alterna Care at Franciscan Health, Rensselaer; Mercy Home for Boys and Girls, Chicago; St. Augustine School, Rensselaer; or, St. Joseph’s College through the Jasper Foundation.

Helena P. Davis of Rensselaer, Indiana passed away December 27, 2018. Helena was born in Coffeyville, Kansas on November 9, 1922, the daughter of the late Gus G. and Genevieve (Packwood) Pointer. Helena was a graduate of Ursuline Academy in... View Obituary & Service Information

The family of Helena P. Davis created this Life Tributes page to make it easy to share your memories.